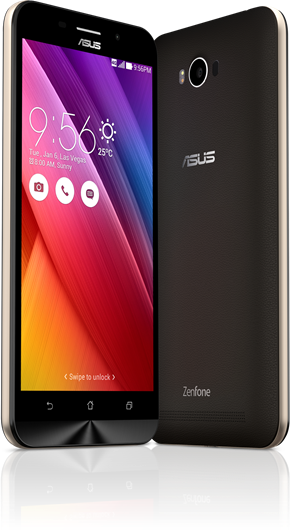 Asus had a big day during the recent ZenFestival in New Delhi, India, as they unveiled the latest additions to the growing line of their smartphones and tablets: ZenFone Max, ZenFone 2 Deluxe, ZenFone 2 Laser, ZenFone Selfie, ASUS ZenPad 7.0 and ASUS ZenPad 8.0.

According to their official press release, Chairman of Asus Jonney Shih revealed that the selling point of ZenFone Max with model ZC550KL, is its “incredibly-long-lasting high-capacity” battery with a massive 5,000 mAh lithium-polymer capacity that gives “users an unprecedented amount of mobile freedom.”

With the outstanding battery, some reports claim that ZenFone Max is not only for usual activities such as browsing the web, taking photos and videos, or sending messages, it may also possibly be used as a charger for other devices.

When it comes to specifications, the display measures 5.5-inch IPS capacitive multi-touch screen with wide viewing angles and 1280×720 resolution in 267 pixel-per-inch density. It is covered with Corning Gorilla Glass 4 for protection against scratch and damages.

Under the hood, it is powered by an energy efficient Qualcomm Snapdragon 410 running in 1.2 Ghz, that is combined with 2GB of RAM. The smartphone will be offered in two storage variants, 8GB and 16GB.

For consumers looking for a good camera, the back shutter is equipped with 13-megapixel PixelMaster lens while the front one has a good 5-megapixel selfie-taking camera with wide f/2.0 aperture. The main camera features laser auto-focus setting for sharp captures.

Shih has not mentioned the specific date for the release of the ZenFone Max across the globe.

Roku 4 vs. New Apple TV: where do the key differences...