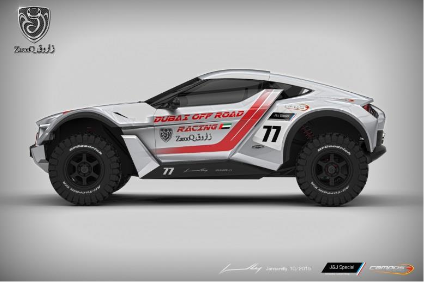 Based on a press release released by the company, a press conference days before the Abu Dhabi Grand Prix was held. Director of Motorsport Mohammed Al Qadi shed some light on what the model has to offer. “The Zarooq SandRacer was created in order to be able to organize an off-road single-make championship and operate a sand racing track in Dubai,” he said. Although touted for special purposes and with racing-grade performance look, the company stated that they also want the unit to be road legal with air-conditioning system to make it practical.

“We don’t aim at being a large scale manufacturer, but a solid niche player consistently delivering innovative and reliable cars. We are an Emirati company and we want to show the world what we are capable of,” Al Qadi added.

When it comes to specifications, the dimensions of the Sand Racer are revealed to be 4,200mm long, 2,084mm wide, and 2,204 pounds heavy. The ground clearance is at high level of 315mm, with limited overhands in the front and in the rear, measuring 700m and 704mm, respectively.

Under the hood, it is equipped with 3.5-liter V6 engine with 304 horsepower and 371 pound-feet of torque positioned at center and rear. The engine is coupled with six-speed automatic transmission with indirect multi-port group fuel injection. Top speed is pegged at 124 mph. Meanwhile, the suspension is designed for off-road performance together with its massive 33-inch wheels measuring 317mm wide with 15mm rims.

Moreover, there is also a non-exhaustive option for buyers opting to have a more immense 500-horsepower version, which will include high capacity reservoir, performance gearbox, brakes, exhaust system, and special FIA pack.

The production of Sand Racer will be completed by December, and it will be unveiled early 2016. Sand Racer’s cost will range from $80,000 to $160,000. The first 20 cars to be produced will be dubbed as Special Inaugural Editions.

Baristas to bartenders: Starbucks to sell alcohol in its new 'evenings'...