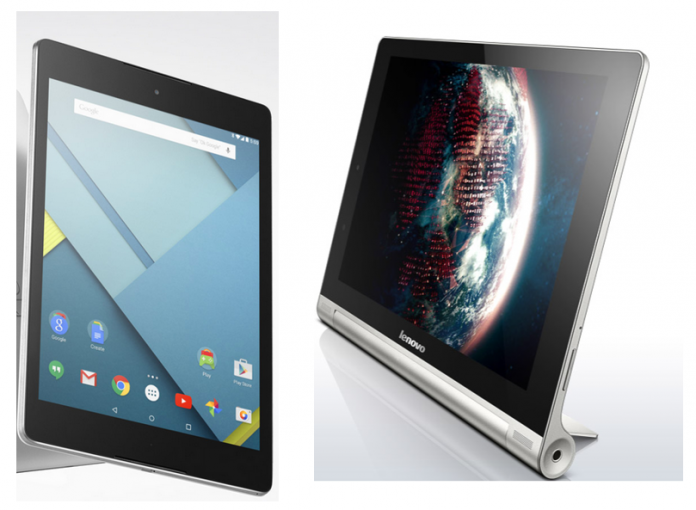 Most of the new tablet releases are accused of looking like American giant’s iPad designs, but one tablet sure stands out from the rest  as it was indeed made differently. Lenovo’s Yoga 10+ HD can be placed in several positions and even has a built-in stand at the bottom. However, how does it compare with the rest, particularly in terms of specifications and features? For now, we will compare it to HTC-manufactured Nexus 9.

The Yoga tablet comes in a 10.1 inch screen IPS display with 1920×1200 pixel resolution at 224 pixels per inch. It is bigger and heavier than most of the tablets in the market with its tubular bulge at the side where the metal stand also rests.

However, the tablet can either be propped vertically or by itself upward. In addition, the end of the circular bulge rest the headphone jack, speaker grilles, and power button. As it was a released last year, the device is powered by a Qualcomm Snapdragon 400 chipset along with quad-core processor of Cortex-A7 1.6 GHz and an Adreno 305 GPU. It also comes with a 2GB RAM and a 64GB internal memory with an option for external expansion of up to 64GB through its micro SD slot. In terms of camera, the device houses an 8 megapixel rear shooter and a 1.6 megapixel front shooter. The tablet comes only in gray but one wow factor is its battery life of 9,000 mAh.

On the other hand, Nexus 9 is smaller at 8.9 inches IPS LCD display screen with 1536 x 2048 pixel resolution at 288 ppi. It is powered with an NVIDIA Tegra K1 chipset along with a dual core processor of Denver CPU at 2.3 GHz and a Kepler DX1 GPU. Nexus 9 comes with a 2GB RAM and a 64 GB internal memory but there is no micro SD slot for external expansion. For its camera, the back shooter is 8 megapixels with some DSLR-like features such as aperture size and focal length, while the front shooter is at 1.6 megapixels. Nexus 9 comes in color options of black, white, and sand, along with a battery capacity of 6700 mAh.

Cost-wise, both are relatively cheaper options for tablets compared to other offerings in the market. Nexus 9 costs around $400 while the Yoga tablet costs approximately $420. Specification-wise, both are relatively at par, so for users who want a lighter device, Nexus 9 may be a better option, but for those who do not mind carrying a heavier tablet for more options of propping it in different needs, plus more battery capacity, Yoga tablet may be the way to go.