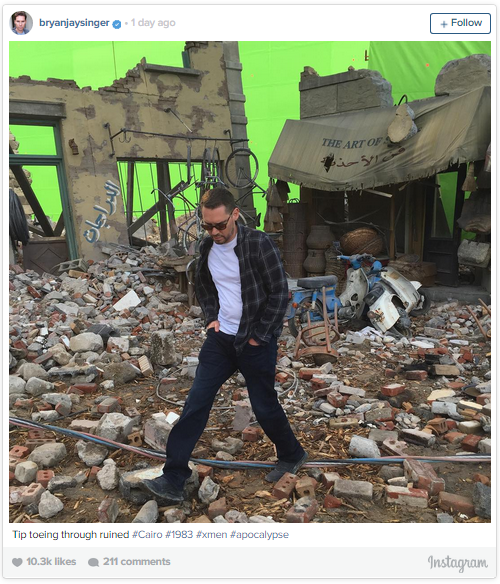 It was not just too long ago when Olivia Munn went trending with her sultry and lethal Psylocke costume and Alexandra Shippe went all-out Storm with her mohawk hairstyle.

Now, instead of leaving fans fishing for information, X-men seems to be providing more teasers, and it’s breaking the internet. The most recent of the teasers came from director Bryan Singer himself as he posted a shot of himself in the ruins of 1983 Cairo on his Instagram account.

The Cairo setting can mean many things. But according to the Hollywood Reporter, it holds a most particularly special significance to the comic book character of Storm because this is where she was first found by Doctor Xavier. She was a street thief in Cairo at the time. Fans can surmise that there will be some form of back story if Cairo proves to be crucial and pivotal location for filming the events.

As far as the latest film’s timeline is concerned, it’s been 10 years after Days of Future Past. The crew pulled all the stops to make sure that they render the best backdrops and costumes for the cast.

The photos have really been indicative of hard work on set as it depicts a sense of destruction and apocalypse. Big baddie Oscar Isaac was almost hard to make out in his full blown villain costume. Prior to the reveal of the Cairo ruins, Singer also confirmed via an Instagram post that William Stryker is back as portrayed by Josh Helman, reports Collider.

These revelations came shortly after the bigger set of teasers from the San Diego Comic Con where Apocalypse’s four Horsemen Magneto, Psylocke, Storm, and Angel/Archangel were revealed.

'Prison Break' season 5 air date, spoilers: will this season be...