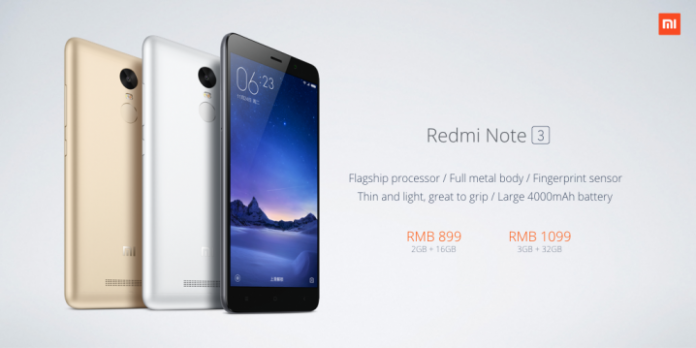 Xiaomi’s Redmi Note 2 Pro was initially expected to come on Nov. 11, following the teaser that point to two devices that scheduled to be unveiled “Nov. 11 onwards.” The date came and went with new rumors surfacing a week after saying that the device had already been certified and could be expected in a couple of weeks. Now, Xiaomi finally revealed the anticipated metal version of the Redmi Note 2, but the company decided to change its name and call it the Redmi Note 3 instead.

Android Headlines was able to join the press conference three days ago when the device was announced. According to their reports, the new handset is indeed made of metal, as initially speculated and comes with a 5.5-inch screen display at 1920×1080 resolution. The device is powered by MediaTek’s Helio X10 64-bit octa-core processor, along with a PowerVR G6200 GPU for its graphics. Buyers can choose between a 2GB RAM with 32GB internal storage or a 3GB RAM with 64GB internal storage.

As for its camera, the main shooter comes in 13 megapixels with an autofocus feature in just 0.1 seconds, while the front snapper comes in 5 megapixels wide angle lens. The phone is also encased with Corning Gorilla Glass 3 and houses two SIM card slots. Color options available are silver, gold, or dark grey. Aside from these, it comes with a hefty 4,000 mAh battery, but it still remained slim at only 8.65 millimeters thick.

The Redmi Note 3 also comes with the much-anticipated fingerprint scanner, which is reported to unlock in only 0.3 seconds, according to the same report. Out of the box, the handset runs on MIUI 7 operating system, the company’s version of Android 5.1

With Redmi Note 3 already announced, fans are just anticipating for Mi 5, which is expected early next year.

‘Sonic Mania’ latest news: Game gets backlash from players as it...