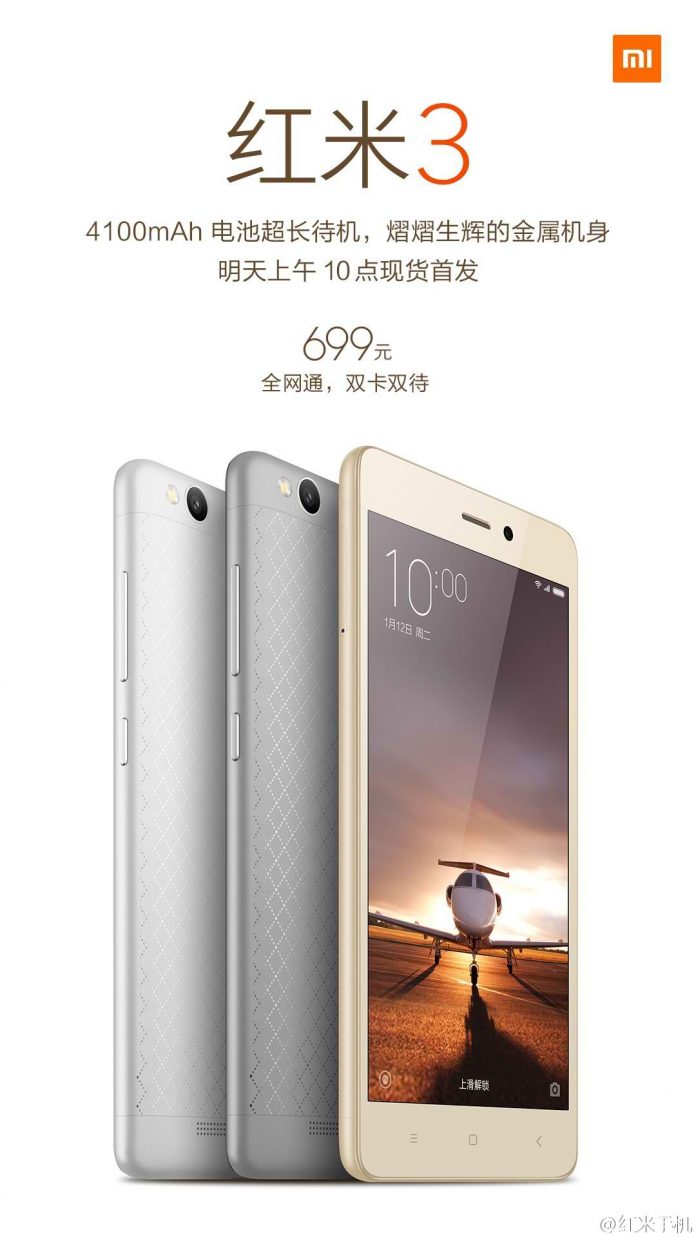 Finally, the long rumored and long teased Xiaomi Redmi 3 has finally been made official, and is now available for purchase, with initial sales exclusive temporarily for its home Chinese market.

As detailed by Xiaomi, the device is a proud new smartphone with a 5-inch IPS LCD display and a full metal body build and 720 x 1280 pixels HD resolution. It measures 139.3 mm tall, 69.6 wide, and 8.5mm thin. The device only weighs 144 grams. The new Redmi 3 smartphone runs under a Qualcomm Snapdragon 616 chipset, with an octa-core ARM Cortex A53 CPU clocking in at 1.5 GHz. The graphics is handled by an Adreno 405 GPU.

A huge 4,100 mAh battery is featured on the device. But despite the increase in battery capacity, the new Redmi 3 smartphones actually comes 0.9 mm thinner than its predecessor, the Redmi 2.

The device packs 2GB LPDDR3 RAM, and it comes with 16GB built-in internal storage capacity. The storage can be further expanded via an external microSD expansion of up to 128GB through the use of the SIM2 nano SIM slot. The SIM1 slot is exclusively used for a micro SIM.

As for the camera, the new Redmi 3 sports a 13-megapixel main rear camera featuring an ultra-fast 0.1-second Phase Detection Auto Focus technology, LED flash, an HDR mode support, and support for other various shooting scenes as well, and an f/2.2 aperture. It comes coupled with a 5-megapixel front facing snapper for selfies and other similar purposes.

The back panel of the device also features a new uniquely designed plaid surface. It boots on Android Lollipop 5.1 with MIUI 7.0 running on top of it. It is available in stylish gold, dark gray or metallic, or a classic gold without the new plaid back panel design.