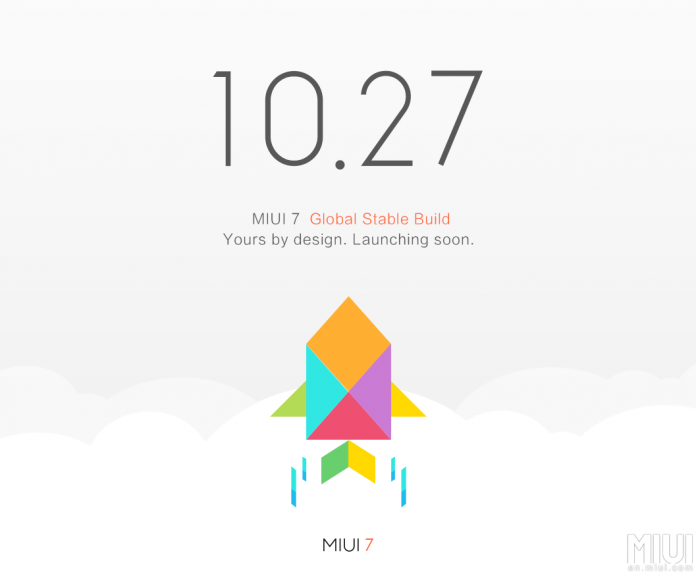 Xiaomi’s newest version of their MIUI interface, the MIUI 7, will finally be available to worldwide users.

The MIUI 7 China and Global Stable Build will start to rollout to users on October 27. As of now, Xiaomi is only making the updates compatible to selected devices, but expect that the list of supported devices will get longer as time pass.

Users of the following devices will receive a notification to install the update via OTA (over the air updates) on the Updater app:

Can’t wait to get the new MIUI 7 but not receiving the update notification yet? Xiaomi also offers the option to install the update manually via the ROM package available via the MIUI Downloads page starting on the same day, too.

On the other hand, users in the Chinese region will be getting the update in the same manner on the same day, on the following devices:

Redmi 1 and Redmi Note 3G users can expect their updates to arrive in no time, as the people over Xiaomi “are working very hard” to deliver the update for the devices.

The new Xiaomi MIUI 7 works to save data usage when connected to the internet for up to 50%. This was made possible through Xiaomi’s partnership with Opera Max to provide the Data Saver feature.

By accelerating CPU performance whenever needed, the device will then be performing better by launching apps and performing tasks for up to 30% faster compared to the previous MIUI 6. The MIUI 7 also optimizes the battery life of the device, extending battery life for up to 25%, or up to 3 hours more battery juice per day.

The MIUI 7 introduces the XXL Text feature, described as “a big, beautiful format that adjusts conversation layouts, line breaks to provide greater readability, unlike those found in other interfaces.” The new Showtime feature lets MIUI users record a five-second video, and this will appear as caller ID for other MIUI users.

As for the Gallery, the new Baby Album features recognizes and sorts pictures of babies and places them in an easily accessible folder, and can then be used as the Daily Lockscreen wallpaper.

Another child friendly feature coming to the MIUI 7 is the Child Mode, which locks all other apps and information when activate, leaving only the child-friendly apps accessible to children.