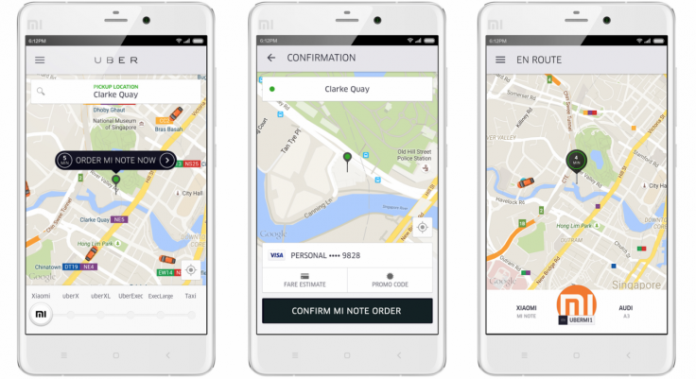 Photo: Xiaomi
The process of ordering Xiaomi’s Mi Note Pro through Uber, as part of their new partnership.

Xiaomi fans in Malaysia and Singapore now have a more convenient way of ordering the upcoming Mi Note Pro.

According to Forbes, Xiaomi and car-sharing company Uber have signed a deal that will turn Uber into a courier company for the company in the aforementioned two countries. Users can now use the Uber app in their smartphones to place an order for Xiaomi’s Mi Note Pro, and have the item delivered directly to their doorstep by cars specially intended for delivery of the devices.

Xiaomi even claims to have the phone delivered to the buyer in just a span of a few minutes after ordering through the Uber app, Forbes revealed.

According to the Franchise Herald, Xiaomi’s international chief Hugo Barra explained the process of ordering through a post in Facebook. According to Barra, users only need to open up the Uber app, slide the bar at the bottom to the left until the Xiaomi tab shows up. When they select the Xiaomi tab, orange-colored cars will appear on the map. Barra then said that the users need only to press Request to initiate an order.

The Xiaomi executive also revealed that users don’t have to go through complicated payment channels.

“Payment will be charged directly to the credit card tied to your Uber account and a Mi Note will be delivered to you within a few minutes,” Barra’s post said.

The collaboration, however, is very limited. CNET said that the service is only available in Kuala Lumpur in Malaysia, and the entirety of Singapore. There is also a limited amount of Mi Note Pro units that can be bought through the Xiaomi-Uber partnership.

The International Business Times reported that Uber users can pre-order the Mi Note Pro 4 on July 27, one day before the tablet is available for sale on the Malaysian and Singaporean markets. The IB Times also noted that this is a new practice for Xiaomi, which typically sells its wares only through its website.