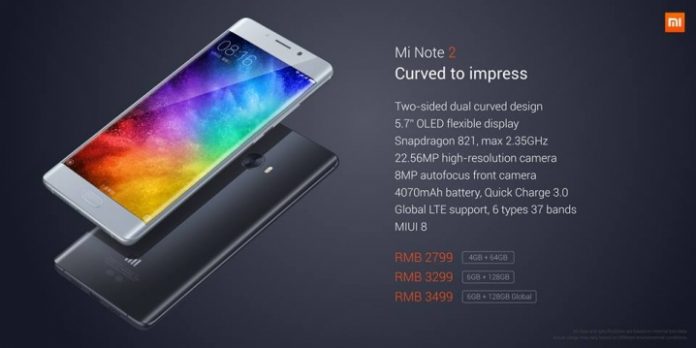 After months of leaks and rumors, Xiaomi finally unveiled its new phablet, the Mi Note 2, at an event in Beijing, China this week. Though the phone is priced less than other premium offerings in the market, the Mi Note 2 is no lightweight, as it packs a powerful processor, impressive cameras, and 6 GB of random access memory (RAM). But how will it fare when pitted against Samsung’s current flagship, the Galaxy S7? The Galaxy S7 has been a favorite ever since it made its debut in February, as it has all the premium features that tech fans have come to expect from Samsung.

This article compares the Xiaomi Mi Note 2 with the Samsung Galaxy S7.

The Mi Note 2 comes in Piano Black and Glacier Silver, while the Galaxy S7 is available in Black, Gold, White, Pink, and Silver.

The Samsung phone is powered by an Exynos 8890 octa-core chipset with 4 GB of RAM, while the Xiaomi device has a Qualcomm Snapdragon 821 chip and 6 GB of RAM.

The Mi Note 2 comes in 64 GB and 128 GB internal storage options, while the Galaxy S7 comes in 32 GB and 64 GB native storage variants which can be expanded via a microSD card.