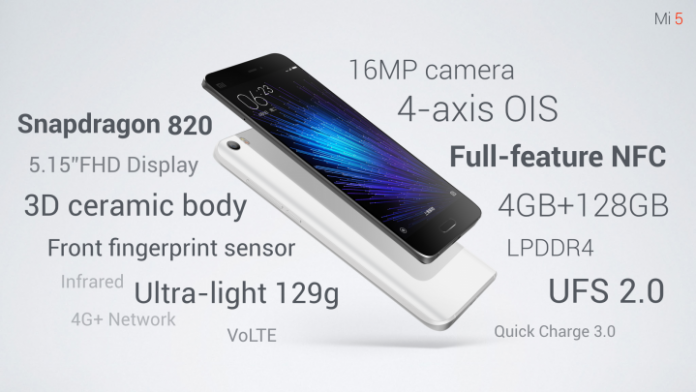 Finally, the long wait is over! After years of waiting, the new Xiaomi Mi 5 flagship is here. The new flagship was officially launched during the Mobile World Congress in Barcelona, Spain, and on a live streaming event.

The new Xiaomi Mi 5 flagship takes pride in being the flagship one could expect from the company and more. Running under the new QUALCOMM Snapdragon 820 chipset, two variants of either 3GB or 4GB LPDD4 RAM were released. The internal storage capacity also comes in two different variants a 32GB one and a 64 GB one. Moreover, there is a premium Pro version which comes with 128GB worth UFS 2.0 memory.

The body of the new Mi 5 flagship is made of 3D ceramic and curved edge glass body. The device measures 144.55 mm tall, 69.20 wide, and only 7.25 mm thick. It sports a nearly bezel-less IPS display of 5.15 inches with 1080p Full HD resolution in an ultra-bright 16-LED backlighting. For more optimal outdoor viewing, Xiaomi improved the Sunlight Display technology. Below the display is the physical home button, which also has the embedded fingerprint reader, the first one of such a setting for a Xiaomi device.

As for the camera, the new flagship sports a 4-axis OIS 16 megapixel Sony IMX298 high-definition sensor wrapped in a sapphire glass lens with a PDAF Autofocus technology and a DTI pixel to pixel isolation technology, with video recording capabilities of up to a stunning 4K resolution. It comes coupled with a 4-megapixel front facing camera with a 2-micro-meter sized UltraPixel sensor. A dual LED flash is included, too.

The device is also equipped with a 4G+ or 4G Advanced onboard support, capable of Cat.12 LTE speeds of up to 600 Mbps. An improved NFC now comes with card virtualization and write mode.

The Xiaomi Mi 5 boots on Android Marshmallow with MIUI 7 on top of it. It has a 3,000 mAh battery with faster Quick Charge 3.0 feature.