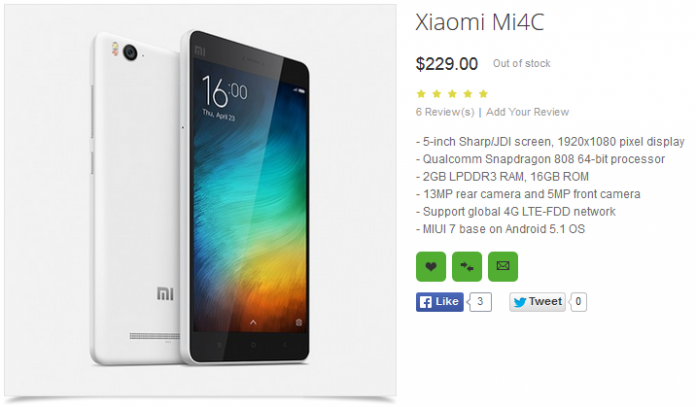 Xiaomi has not yet released a new flagship that will replace the current Xiaomi Mi 4. While the Xiaomi Mi 5 only continues have a hot time in the rumor mill, the Xiaomi Mi 4c seems to be closer to a certainty, as the device was previously given a TENNA certification, and now the phone was put up on a listing on Oppomart, Oppo’s online store.

The Xiaomi Mi 4c, as shown in the listing, runs on a 1.8GHz 64-bit hexa-core Snapdragon 808 processor, with an Adreno 418 BPU for graphics performance. It sports a 5-inch wide Sharp/JDI display, with a 1080 x 1920 Full HD resolution and a pixel density of 438ppi. It packs 2GB worth of LPDDR3 RAM, along with 16GB of built-in internal storage. It was not made clear if the device will be supporting an external microSD expansion or not.

As for the camera, a 13 megapixels snapper graces the back of the device, and it comes with a 5 megapixels front-facing camera selfies and video calling. The Xiaomi Mi 4c is powered by a 3080 mAh battery, and boots on Android Lollipop 5.1 with Xiaomi’s MIUI 7 running on top of it.

While there was no release date shown in the listing, previous reports point to a possible September 24 reveal date for the Xiaomi Mi 4c, with a release date on October 3. According to reports, only 100,000 units of the Mi 4c will be made available.

As for the Xiaomi Mi 5, the latest reports point out that the long-rumored flagship may final be close to its release.

In a recent report by GSM Arena, what seems to be the teaser announcement image for the Mi 5 was leaked online. While the image leak did not reveal anything significant, it greatly hinted on the presence of a fingerprint scanner on the Mi 5, as it showed a fingerprint on the lower part of the image.