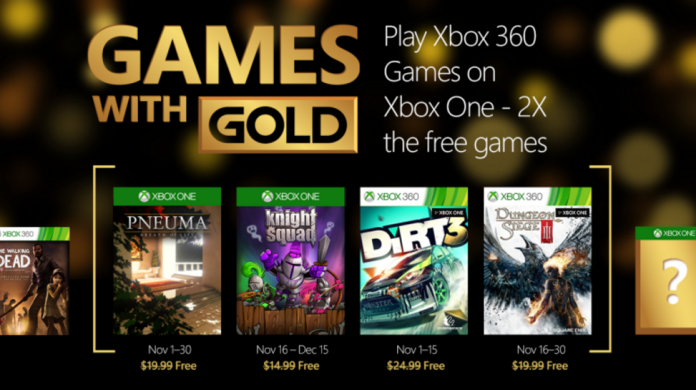 Moreover, Xbox One owners will now have double the free games they used to get every month, all thanks to the new Xbox One Backward Compatibility feature that will start to roll out on Nov. 12. This means that all free games that will be released for the Xbox 360 console will also be available for Xbox One owners to download, making their roster of free games every month rise to a total of four games in all.

For the month of November, Xbox One players can download “Pneuma: Breath of Life” and “Knight Squad.”

Looking for some mind-boggling puzzle challenge? “Pneuma: Breath of Life” gives players just that, but it also delves deeper into the mind of the human being and the power that a person’s decision has over his life. A game developed to be played alone, it promises to have players thinking, questioning, and pondering thoughts about life.

This online multiplayer game is pretty straightforward choose a warrior knight, then have him hack and slash his way through enemies, taking down as many as possible along the way.

Race in rally cars in various field tracks and weather conditions in “DiRT 3.” This game will also be available for Xbox One players, which means that they can join in the online racing fun with Xbox 360 owners.

Monsters? Check. Treasure? Check. Epic adventures? Check. Get that chosen warrior ready, as an epic journey in a medieval land is about to start, with friends being able to drop by and help along the way, too.