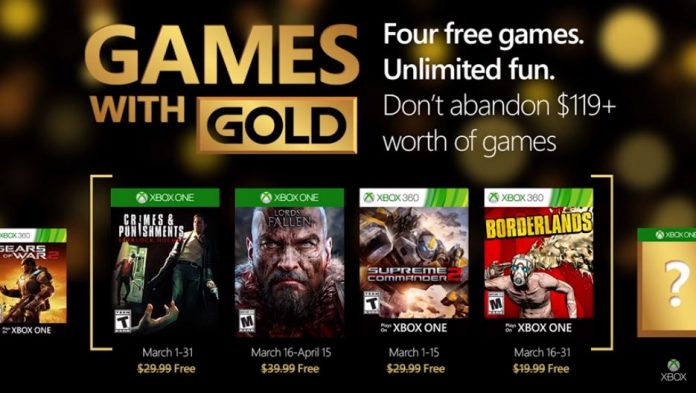 The month of February is coming to an end, and for subscribers of Xbox Live Gold, this means that a new set of free games will be available for download. This March, there will be a total of four games that will be given away for free.

As revealed by the official Xbox Wire, there will be two games available for Xbox One players and two for Xbox 360 players. However, with the new Xbox One Backwards Compatibility feature, Xbox One players will be able to get and play all games for free.

For Xbox One players, the mystery adventure game “Sherlock Holmes: Crimes & Punishments” and the action role playing game “Lords of The Fallen” will be given away. On the other hand, “Borderlands” and the action shooter “Supreme Commander 2” will be available for players on the Xbox 360.

Following the narrative style of the original Sherlock Holmes stories by Sir Arthur Conan Doyle, this game will have players not only utilize their skills in solving the cases, but it will also leave them with moral choices regarding how to deal with people who have been wronged.

Players will play as the character Harkyn, a condemned criminal who is on a journey to absolve himself of his crimes and avert a massive war in a world of dark fantasy.

Time to bring out that inner tactician in this game that will have players build, expand, maneuver, and destroy various battle scenarios.

In this game described as “part shooter, part role-playing game, part insane hilarious story,” players will be left behind in the wilderness of Pandora and must defend themselves against every threat that will come their way.