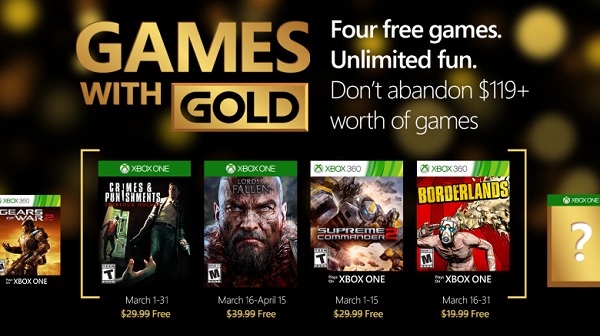 Microsoft announced on Tuesday, Feb. 23, that four new titles will be available for free for Xbox Live Gold members through the Games with Gold program for March 2016. There will be two free games for each console, although the free Xbox 360 games will also be playable on the Xbox One through its Backwards Compatibility feature.

“Four all-new titles come to Games with Gold in March, bringing you a little bit of every genre, to help shake off some of that winter chill. Xbox One gamers, remember that thanks to backward compatibility on your new consoles, you can play all four titles, completely free, when they release on Games with Gold,” Microsoft said in a press release.

First up is “Sherlock Holmes: Crimes and Punishment.” Frogware’s adventure title will be free starting March 1 and will continue to be free for the entire month. The graphic adventure, which currently sells for $29.99, will go back to its regular price in April.

Next, Xbox One gamers can download “Lord of the Fallen” for free for one full month, starting from March 15 all the way to April 15. CI Games’s action RPG can be bought for $39.99 at the moment.

Meanwhile, Xbox 360 gamers can also download “Super Commander 2” for free for the first half of the month (March 1 to 15). Wargaming Seattle and Square Enix’s strategy title is currently listed with a $29.99 price tag.

While waiting for March 1, Xbox One and Xbox 360 owners can still get “Hand of Fate” and “Gears of War 2,” respectively, for free until Feb. 29. Another Games with Gold Xbox One title, “Styx: Master of Shadows,” will be available for free until March 15, 2016.