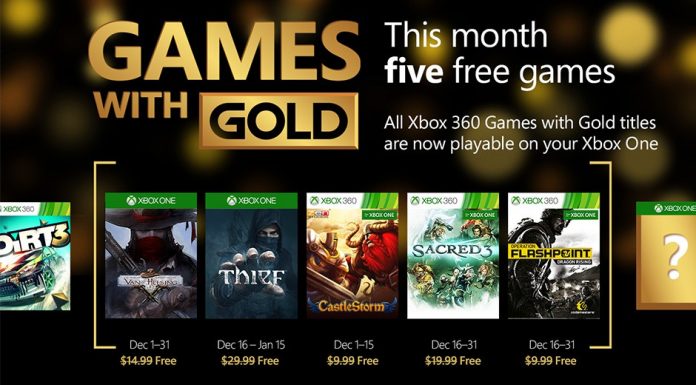 A new month and a new set of free games exclusively for Xbox Live Gold members with the Games with Gold program has been revealed.

The year maybe endingwith December on its waybut Games with Gold will not slow down. Instead, it will be giving more to their loyal Xbox Live Gold members. For the month of December, players will be getting one additional game free on top of the usual roster of four free games for the Xbox One and the Xbox 360.

Moreover, Xbox One owners can now enjoy twice as much free games all thanks to the recently launched Xbox One Backwards Compatibility, which allows Xbox One users to load and play Xbox 360 games. At the same time, they will also be able to enjoy console-exclusive features such as Game DVR functions, the ability to take screenshots, and stream to a Windows 10 system.

For December, a total of five games will be made free to Xbox Live Gold members: “The Incredible Adventures of Van Helsing” and “Thief” for the Xbox One, and “CastleStorm,” “Sacred 3,” and “Operation Flashpoint: Dragon Rising” for the Xbox 360 with Backwards Compatibility for the Xbox One.

Based on Bram Stoker’s “Dracula,” the games takes on the 19<sup>th century European world of the young vampire hunter Van Helsing.

This new and modern take on the classic game franchise once more puts players in the shoes of Master Thief Garett, in his story about saving his city.

In this medieval-themed tower defense game that combines gameplay elements of “Kingdom Rush” and “Angry Birds,” players get to choose sides in a battle of vikings against knights.

This game focuses on the importance of team work and cooperative gameplay, as players must work together to fend of hordes and waves of foes. Aside from attacking individually, joint attacks and skills can also be utilized.

As December’s bonus game, this military simulation game will take players back in time in the fictional island of Skira.