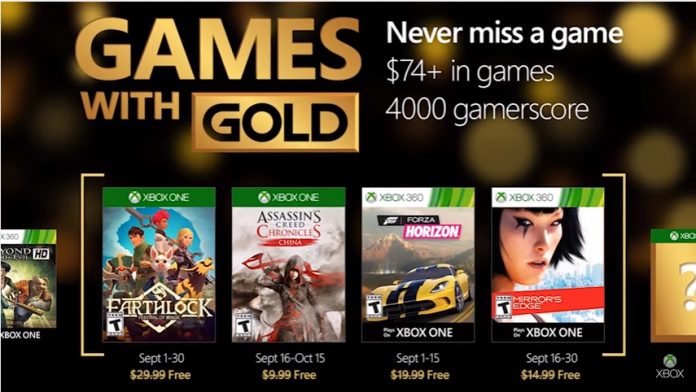 A couple of more days to go before September and Microsoft has already rolled out the latest inductees to their Xbox Games with Gold program. As always, two Xbox One and two Xbox 360 titles will be deemed free of charge in which the games of the latter console will be playable on the former through the Backward Compatibility feature.

For the Xbox One, an upcoming game in the form of “Earthlock: Festival of Magic” will be one of the games to be included in next month’s Games with Gold program. Slated to be released on Sept. 1, which is also the same date when it will be part of Xbox’s free games program, it is a role-playing title developed by Snowcastle Games. The upcoming game will be set on the planet dubbed Umbra which stopped rotating due to a yet to be known catastrophe. In addition, the game will be under the program for the whole month of September.

Another Xbox One title is “Assassin’s Creed Chronicles: China” from Ubisoft. Players assume the role of Shao Jun who is said to be the only surviving member of the so-called Chinese Brotherhood. Shao’s meeting with the feared assassin Ezio motivated her in tracking down the Templars and eventually rebuilding the Chinese division of the Brotherhood. The game will be part of Xbox’s program during the second half of next month up until Oct. 15.

Meanwhile, Xbox 360 title “Forza Horizon” from Playground Games will also be a part of the free games program. Released almost four years ago, the racing game is the fifth episode of the franchise but declared as a spin-off of the actual game. It will be on the Games with Gold list from Sept. 1 to 15.

Lastly, EA DICE’s “Mirror’s Edge” is an action-themed title that was released for the Xbox 360 in 2008. It is set in an almost perfect city known as Glass where every movement of its people are being monitored by the government, not to mention that smoking and drinking alcoholic drinks are also outlawed. The game will be part of the program during the second half of next month.