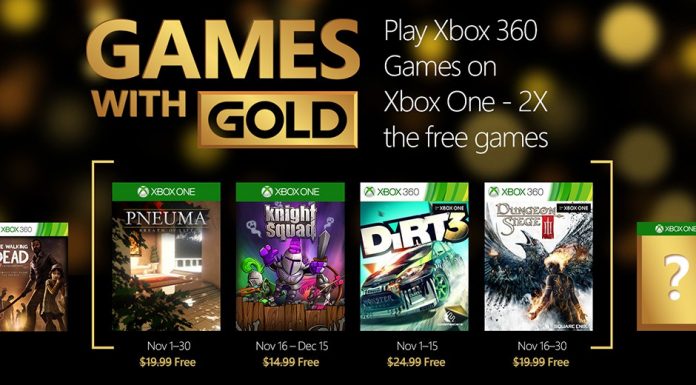 Players are in for a treat as Microsoft will be giving away a number of free games for the month of November for members of their Xbox Live Gold subscription.

Two games will be available for the newer generation console Xbox One, namely “Pneuma: Breath of Life” from the first day of the month until Nov. 15, and “Knight Squad” from Nov. 16 to 30. The owners of Xbox 360, on the other hand, can get their hands on “DiRT 3” and “Dungeon Siege III” that will become accessible from Nov. 1 to 15 and Nov. 16 to 30, respectively.

Microsoft’s director of Xbox programming Larry Hryb also shared on his blog that when the Xbox One Backward Compatibility begins rolling out on Nov. 12, Xbox One owners can double the amount of free games that can be playable on their platform.

“Play multiplayer with your friends no matter which console they’re on and enjoy Xbox 360 games with the advanced features of your Xbox One, including Game DVR, Screenshots, and in-home streaming to Windows 10,” he said.

Based on the official website, the new feature has started to go live for preview members but will be broadly launched this fall. It is easy to use and works both with disc-based and digital downloads. The release will also be accompanied by more than 100 titles and more to come in the following months.

When Xbox delivers it on the aforementioned date, an automatic notification that reads “Ready to Install” will show up. While for the games that use physical copies, the disc has to be inserted first and be kept on the drive while playing to have all the features included.

'The Expendables 4' news: Stallone, Statham share possibilities of what could...