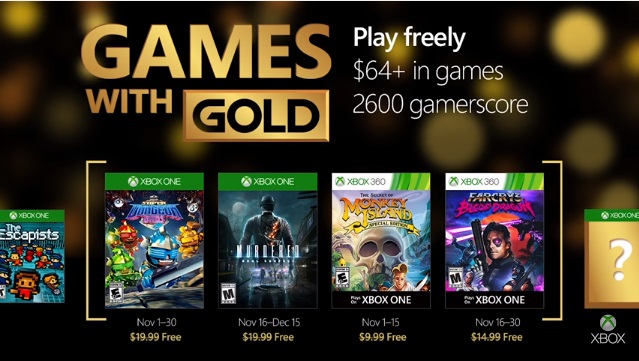 Xbox Live’s Major Nelson, also known as director of programming Larry Hryb in real life, recently dished out the latest roster of games under the Xbox Live Games with Gold program. Every month, the program dishes out a pair of free titles for both Xbox One and Xbox 360. Furthermore, titles for the latter console can be played on the former via its Backward Compatibility feature.

Xbox One players will be getting Airtight Games’ detective horror title, “Murdered: Soul Suspect.” Players will take control of Ronan O’Connor who was once a detective before he was killed by the “Bell Killer,” the antagonist that he was investigating at the start of the game. Hence, the ghost detective will be on a mission to discover who the killer is before he is reunited with his wife in the afterlife. However, the game won’t be ready for download until Nov. 16.

Another title deemed free next month is a metal-themed title known as “Super Dungeon Bros” where players assume the role four protagonists named after legendary rock stars. Moreover, players can traverse the game on either campaign or “bro-op” mode. It will be available through the entirety of next month.

Meanwhile, Xbox 360 owners under the program will be getting LucasArts’ remake of ’90s adventure video game classic titled “The Secret of Monkey Island: Special Edition.” The title will be available at the beginning of next month until Nov. 15.

Ubisoft’s “Far Cry 3: Blood Dragon,” on the other hand, is a first-person action-adventure title set in a post-apocalyptic 2007 where the planet has been ravaged by a nuclear conflict. Gamers assume the role of a cyborg-looking protagonist, Rex Colt, and the game will be available to download during the second half of November.