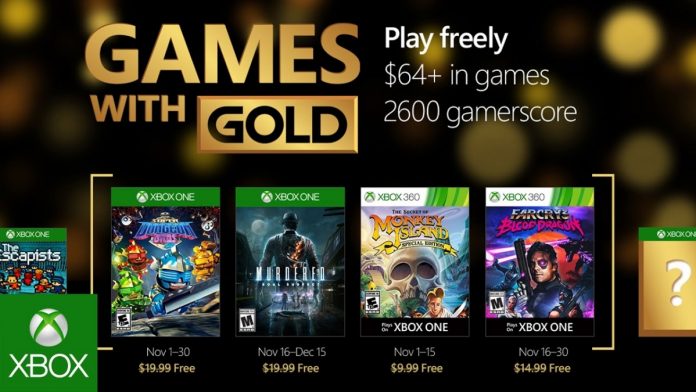 This November, Xbox Live Gold members will be getting four new free games as part of the Games with Gold program.

Xbox Live Gold members on Xbox One can download “Super Dungeon Bros” for free during the entire month of November. In the game, players embark on a quest from the gods of rock with heavy metal heroes Axl, Lars, Freddie and Ozzie in a rock-themed dungeon brawler. Gamers can play on their own or with up to four friends while raiding dungeons in search of treasure, hordes of evil undead, and the legends of long-lost rock stars.

“Murdered: Soul Suspect” will be available for free download on Xbox One from Nov. 16 to Dec. 15. The game is played in a third-person view as players go on an adventure as detective Ronan O’Connor. Players explore a fictionalized version of Salem, and because O’Connor is a ghost, he has a number of abilities that gamers can use such as teleportation and possession.

Members on Xbox 360 can download “Monkey Island: Special Edition” starting Tuesday, Nov. 1 until Nov. 15. The remake of the original “Monkey Island” game was launched back in 2009, and players get to assume the role of a young man named Guybrush who longs to become a pirate and explores islands while solving puzzles.

Another free title for Xbox 360 is “Far Cry 3: Blood Dragon” which Xbox Live Gold members can download from Nov. 16 to 30. The hilarious first-person shooter is a parody of ’80s action films and video games. It takes place on an open world island and players get to assume the role of military cyborg Sergeant Rex “Power” Colt. Fans of the original “Robocop” and “Mad Max” films will surely enjoy this free game, which was launched in 2013.

Some titles from the October list can still be downloaded for free. Members on Xbox One can still get “The Escapists” until Nov. 15.