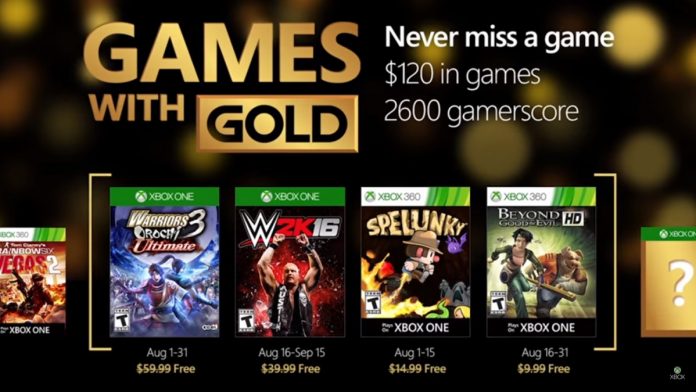 When one month ends, another month comes and with every month that comes, players subscribed to Microsoft’s Xbox Live Gold premium gaming service are set to once again receive a new games that would be made available for them to download for free as part of the Games With Gold program.

This month, Microsoft encourages players not to “wrestle” with the urge to download the list of free games for the month of August. One of the major highlights of this month’s list is the inclusion of the hit sports game “WWE 2K16.”

For the month of August, there will once again be a total of four games featured on the updated roster of free titles under the Games with Gold program. There would be two games for Xbox One console and two games for the Xbox 360 console.

As usual, players on the Xbox One get to play all games released for the month, all thanks to the ongoing Backward Compatibility program, allowing players on the current-gen console to play games from the previous generation console.

The following is the list of games that would be made free for the month of August, and their respective release dates:

“Warriors Orochi 3 Ultimate,” available on the Xbox One from Aug. 1 to 31.

This game combines the characters from two franchises “Dynasty Warriors” and “Samurai Warriors” in order to take down Orochi, the Serpent King.

Play as any of the over 120 different wrestlers in this game, featuring story mode and MyCAREER mode.

In this platform game, players need to blast their way through the different levels and through various different shortcuts.

In this critically acclaimed and beloved game, players get to play the role of Jade, an investigative reporter trying to uncover a sinister government conspiracy. Jade gets help from his uncle Pey’j, who is a pig.