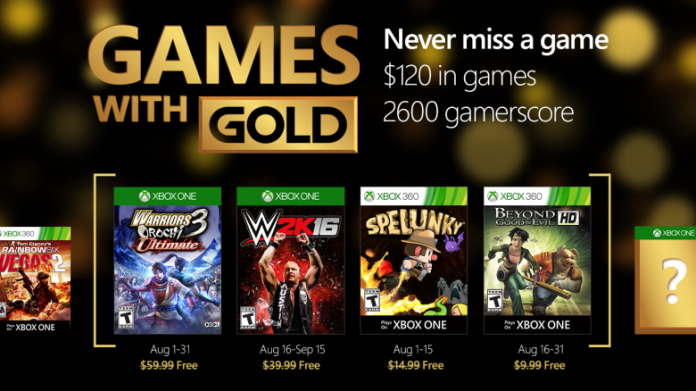 Members of the Xbox Live Gold program are once again treated to four free games for August which include already available “Warriors Orochi 3 Ultimate” and “Spelunky,” while “WWE 2K16” and “Beyond Good & Evil HD” will arrive in the middle of the month.

According to official blog of Xbox Live’s director of programming Larry Hryb, known online as Major Nelson, Xbox One owners can download “Warriors Orochi 3 Ultimate” for free until Aug. 31. Its original retail price is $59.99. On the other hand, “WWE 2K16,” priced at $39.99, will be available to download for free starting Aug. 16 and can be accessed until Sept. 15.

Moreover, those who have the Xbox 360 can get their hands on “Spelunky,” originally $19.99, for free until Aug. 15. It will be then replaced by “Beyond Good & Evil HD” ($14.99) for free through the end of the month. Players with the latest generation console, the Xbox One, can also enjoy the aforementioned titles via the console’s Backward Compatibility feature.

For first-time gamers of each title, “Warriors Orochi 3 Ultimate” allows the user to control their favorite characters from “Dynasty Warriors” and “Samurai Warriors” in an action-packed gameplay. The objective is to defeat the titular antagonist, also known as the Serpent King, by choosing from over 120 playable characters that can be part of three-character teams.

Meanwhile, “WWE 2K16” is the ultimate wrestling game that has the biggest and most comprehensive roster in the franchise’s history. Game enthusiasts can select from a wide array of Superstars that include the one on the cover, “Texas Rattlesnake” Stone Cold Steve Austin.

“Spelunky” is an open-source indie video game that includes interesting adventures as a spelunker and explorer of the caves. It offers a unique platform of randomized levels for new challenges every time one plays. Some of the main objectives are to collect treasures, explore underground, fight off adversaries, save other characters, and prevent being trapped.

Lastly, “Beyond Good & Evil HD” is a remastered version that features improved sequences, full high-definition textures, and a modified soundtrack. The player gets to experience the journey of Jade, an investigative reporter who exposes an alien conspiracy by the government through eliminating enemies, solving puzzles, and collecting evidence with help from her loyal pig friend, Pey’j.