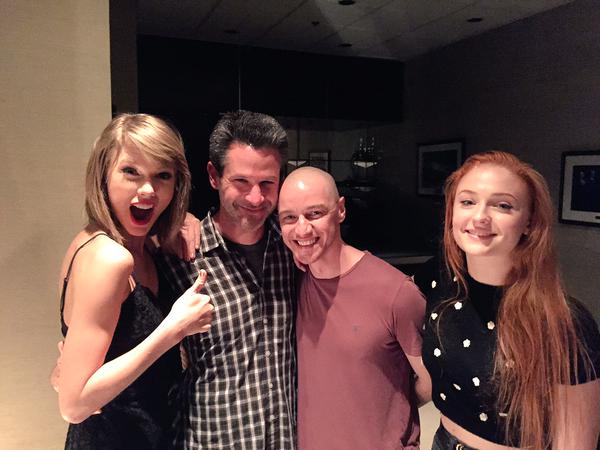 The Internet has been abuzz for months with rumors that pop star Taylor Swift will be appearing in the next X-Men film, X-Men Apocalypse.

All of these rumors were denied by the film’s producer, Simon Kinberg, Movie News Guide reported.

According to the article, the rumors started when Kinberg posted a photo on his Twitter account showing him and X-men stars James McAvoy, who plays the role of the young Charles Xavier, and Sophie Turner, the young Jean Grey, together with Swift.

However, Kinberg explains that the photo was a backstage snap during one of Swift’s Canadian tours. The producer revealed that he, McAvoy, and Turner, together with Nicholas Hoult and Rose Byrne, had gotten themselves tickets to the concert and were afterwards invited backstage by the pop star.

“[We] went to the show, me and those people, and then she invited us to come back and meet her afterwards,” Kinberg said in a Movie Pilot article.

“It was just a photo backstage at the concert, and that was the only time we ever saw her. That’s where that particular rumor came from,” the producer explained.

Some of the rumors theorized that Swift would take on the role of Dazzler, who was also a pop star in the 1980s in the X-Men comic book universe.

Kinberg also told MTV, while it is not true, he certainly finds the idea “kind of interesting,” but stressed that he and his companions were just there for Swift’s concert when the picture was taken.

In addition to admitting that the rumors were his own fault, Kinberg also revealed that Taylor Swift’s music was a sort-of adrenaline booster for him while shooting X-Men: Apocalypse.

“It became for me, it was what I was listening to every morning to get sort of energized and I would listen to it on the set every day for ‘Apocalypse’,” he is quoted as saying.