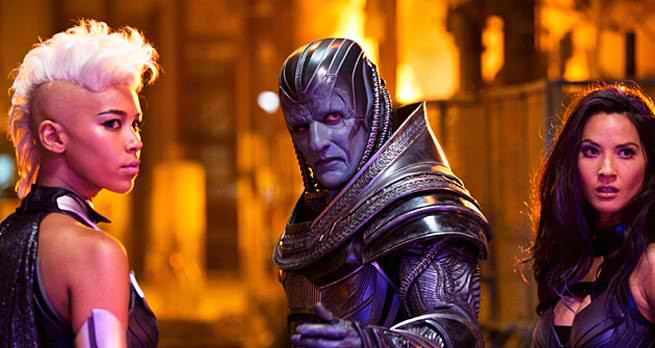 The past few “X-Men” films visited the iteration of popular Marvel Comics mutants as their younger versions. From Professor Charles Xavier to Cyclops to Jean Grey to Raven, each familiar mutant from the original “X-Men” trilogy saw younger versions of themselves. For the upcoming “X-Men: Apocalypse,” the long awaited big screen debut of one version of Storm’s look will finally happen, as portrayed by young actress Alexandra Shipp.

In a recent interview with Collider, Shipp talked about her characterhow she felt about being the one to debut the Mohawk Storm, her Storm’s difference from the Storm of Halle Berry in the original trilogy of films, and the backstory of her character in the upcoming film “X-Men: Apocalypse.”

With the hairstyle the character of Storm had been known to sport in the comicsas well as in the live-action rendition of Halle Berry, with the white wig she used all throughout the filmsShipp found it perfect when she learned that she would be debuting the Mohawk of the classic mutant.

“I was really excited too ’cause when I was thinking, ‘What are they going to do with my hair?’ They weren’t too sure,” Shipp shared. “They’re like, ‘Oh we’ll let you guys know.’ Then I’m like, ‘Okay, well, I was thinking that they would do like the long white hair’, then I was like, ‘Are they going to use my hair?’ Then they told me they were doing the mohawk. I was like, ‘Perfect.'”

As to the difference between Halle Berry’s Storm and hers, Shipp said that while Berry’s take on the character is one where she is already on the side of the good and is fighting as a hero with the other X-Men, her younger version will find the character teaming with the bad guys in her origin story.

“This Storm is a little bit different because you’re meeting her in Cairo,” she said. “You’re seeing kind of a little bit of where she comes from. You’re seeing all the pain that she’s gone through. It’s not like she’s in the mansion having a great time.”

“Storm is always looking for father figures,” the actress added, noting that while Apocalypse certainly is not the best kind of father figure for him, she likened him to people who come to people like her Storm and gives her everything she wants, and everything she think she needs. But ultimately, it was Professor Charles Xavier who played that role in her life.

“What I found in the comics and stuff like that, is that Xavier kind of ends up being that for her. When she joins X-Men she finds that love for him.”

“X-men: Apocalypse” opens in theaters on May 27.