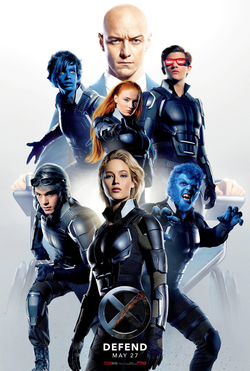 The ninth installment of the X-Men series will hit the screens in 2016, as “X-Men: Apocalypse” has been set for release.

Directed by veteran filmmaker Bryan Singer, the story revolves around Apocalypse, the first mutant and is considered to be the most powerful one, having acquired the power of both immortality and invincibility.

After thousands of years in hibernation, Apocalypse awakens and becomes disappointed with the world he has seen. He then forms an alliance with other powerful mutants, which includes Magneto. Together, they embark on a quest to create “a new world order” which they foresee themselves running.

This has once again placed Professor X and his team of good-hearted mutants in a position where they need to step up and put a halt to the evil plot that Apocalypse and Magneto have put in place.

“X-Men: Apocalypse” has been met with anticipation since its announcement was made in December 2013, wherein Simon Kinberg, Michael Dougherty, and Dan Harris were tasked to develop the story.

The said title is also the fifth film wherein Singer has been involved in. After handling the director duties for the debut film “X-Men” in 2000, as well as the sequel “X2” in 2003, Singer left himself out in the making of the succeeding titles.

Veteran director, Brett Ratner, was then tasked to handle the third title, “X-Men: The Last Stand.”

For “X-Men: Apocalypse,” Scottish actor James McAvoy will be reprising his role as Charles Xavier, a.k.a. Professor X. Michael Fassbender will also be revisiting his old role as Erik Lehnsherr, better known as Magneto.

Jennifer Lawrence will also reprise her role as Mystique, while Halle Berry will once again be playing the role of Storm.

Nicholas Hoult will be reprising his role as Hank McCoy, a.k.a. The Beast.

“X-Men: Apocalypse” is set to hit theaters on May 27th in North America in both 2D and 3D.