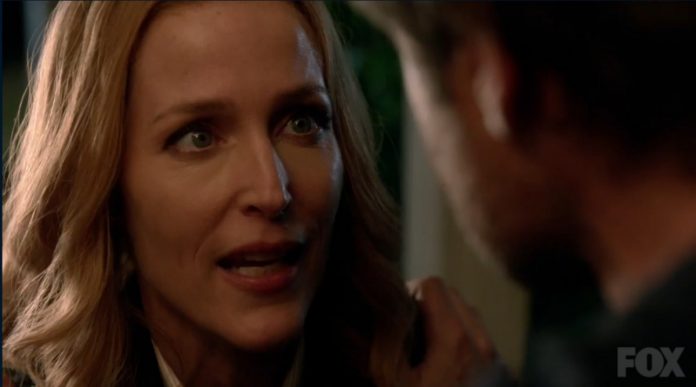 Fans of Dana Scully (Gillian Anderson) and Fox Mulder (David Duchovny) rejoiced when the revival of the science fiction horror series, “The X-Files,” was announced. Scheduled for a two-night premiere, the series will be all about finding the truth.

According to Den of Geek, Fox has been building up the hype for the much-awaited series by dropping new weekly trailers during “Gotham.” The latest one features Scully and Mulder teaming up again after the government’s secret regarding the discovery and hiding of alien technology is revealed.

Meanwhile, during the EW Fest held last Oct. 24 in New York, “X-Files” writers Glen and Darin Morgan talked about their experiences while writing stories for the show.

On the other hand, Darin teased about the upcoming episode titled “Mulder and Scully Meet The Were-Monster.”

He said, “I had a story I had been wanting to tell for a long time that had a monster in it, but it was more about human life than a monster story. There’s no show you can do that on. I thought about doing it as a feature, but that world has changed. So I had an opportunity with The X-Files. This is the only place you can tell that story.”

In a separate interview with EW, Duchovny said that his character is in a very dark place. He pointed out Mulder’s wardrobe  from his bad jeans to his shoelace-less shoes and stubbles. For her part, Anderson said that she likes the state of Mulder and Scully’s relationship after they were last seen by viewers in the 2008 feature film, “The X-Files: I Want to Believe.”

For those who are wondering if the iconic opening scene of the show will be changed, Vulture has confirmed that it will be the same one used since 1993. Series creator Chris Carter said that changing the opening credits “seemed like sacrilege.”