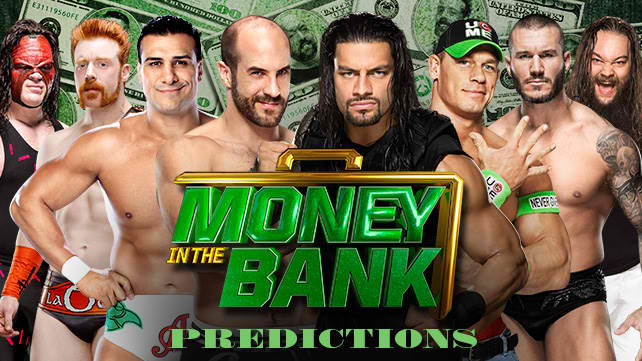 WWE Network’s 2015 “WWE Money In The Bank” pay-per-view live is happening on June 14 and speculations on how the showdown will unfold are beginning to buzz among wrestling enthusiasts.

According to a report by Huffington Post, “WWE Money In The Bank Kickoff Show” will start with R-Truth versus King Barrett. The following matches will follow: The New Days versus The Prime Time Players for the Tag Team Championship Match; Ryback against The Big Show for Intercontinental Championship Match; John Cena’s face-off with Kevin Owens during Champion versus Champion Rematch; Nikki Bella against Paige on women’s division for Divas Championship; MITB Ladder Match will have Neville, Sheamus, Randy Orton, Roman Reigns, Kane, Dolph Ziggler, Kofi Kingston; and for the anticipated World Heavyweight Championship Match, Dean Ambrose will fight off Seth Rollins.

The report also shares some predictions that Dean Ambrose might possibly get knocked down while the big winner might be Roman Reigns. Some rumors suggest that Roman Reigns might also reportedly cash in during World Heavyweight Championship match or right after.

While the upcoming PPV gets fans excited, some followers also reportedly notice the absence of Bray Wyatt.

Based on Ring Side Report, Wyatt continue to be absent on recent PPVs, Smackdowns and Monday Night Raw, with his last win on May 18’s Raw against Dean Ambrose. His absence has been more noticeable as he appears on WWE Events page and being advertised for PPV although he is not booked, the site reports.

There were rumors that he might be present during WWE Extreme Rules match with Rusev, however viewers have seen Mark Henry appearing instead, Christian Today reports. The report also suggests that even though he may not compete, it is possible that Wyatt might be inserted during Ladder Match to get retribution from losing during his previous fight against Roman Reigns. This is still a speculation though, but including Wyatt as the eight man will make for an exciting and even match, the report added.