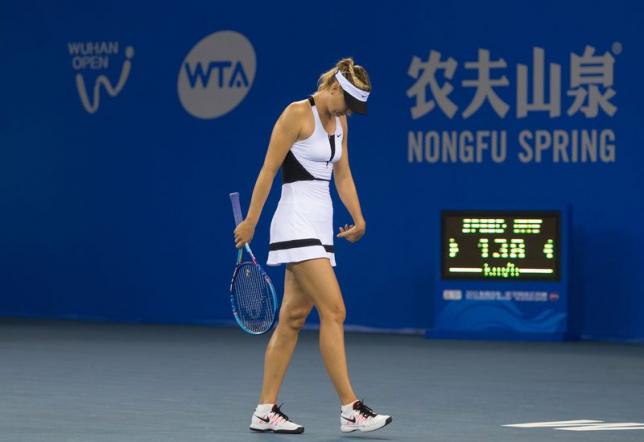 Maria Sharapova, Women’s Tennis Association’s world No. 4 player, went into the 2015 WTA Finals Sunday in Singapore with initial doubts of winning, after a series of injuries at the United States Open and then at her comeback match in Wuhan last month.

“Look, it’s a big step for me to be here and feel that I am healthy,” Sharapova told Reuters.

Competing round-robin fashion with other players on the Red Group  Simona Halep, Agnieszka Radwanksa, and Flavia Pennetta  Sharapova said, “It will be a bigger step that I’ll be able to compete in those three matches and finish them off healthy. That’s my goal.”

By Day 3 of the WTA Finals, the Russian player had moved to the top of the Red Group after dominating her kick-off opponent Halep and then proceeded to run down Radwanska at her latest game, making for two wins at the eight women end-of-season finals. This puts her up against Flavia Pennetta on her next bid.

The Singapore 2015 WTA Finals is the 45th edition of the singles event and the 40th for the doubles. Eight singles players and eight doubles teams will play in the tournament until Nov. 1. The WTA Finals is run as part of the WTA Tour. On the singles event, each player gets to play against three other players in the group within the first four days of the tournament.

Day 4 will see the White Group front and center, with Garbine Muguruza moving closer to a semifinals qualifications, and Petra Kvitova and Lucie Safarova to vie for a first win. Kvitova, so far, leads head-to-head, 7-0. On Wednesday, Safarova gets the chance to break the Kvitova serve. Whether she does is something to be seen. The other two players on the White Group also get the chance to decide who will conquer, with a tie so far at 3-3.

Day 4 will also reveal if Martina Hingis and Sania Mirza get the semifinal qualification in the Red Group doubles.

In the next few days, Sharapova fans will also witness the five-time Grand Slam champion as she shows her fighting spirit in her upcoming match with U.S. Open champion Pennetta.

Ronda Rousey and Holly Holm news 2016: Rematch may not be...