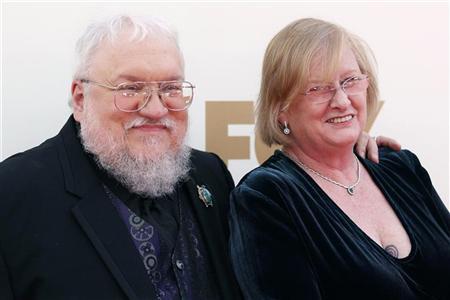 Fans cannot seem to stop asking every time they see George R.R. Martin on when he will finish the much-awaited sixth installment on “A Song of Ice and Fire” saga, “Winds of Winter.”

During his recent appearance during Sanquan science-fiction convention in Spokane, Washington, “Don’t ask me when the book is going to be done I’ll ask my minions to lop your head off,” Martin humorously answered.

When asked by Geekwire if it is probable that the HBO TV version by David Benioff and Dan Weiss releases the very last episode on the eight-season planned series even before he finished the concluding book, Martin said, “Anything is possible.”

“The show is moving forward like a locomotive, or sometimes a jet locomotive. They’re writing 60-page scripts, I’m writing 1,500-page novels. So who the hell knows?” he continued.

Acknowledging the time when he was concerned that the show may catch up with his novel, he recounted his experience and shared, “There was a period where I was worried about that. Then I said, to hell with that. Worrying about it isn’t going to change it one way or another. I still sit down at the typewriter, and I have to write the next scene and the next sentence … I’m just going to tell my story, and they’re telling their story and adapting my books, and we shall see.”

Martin previously teases that there will be an unexpected twist for a long-time character that he considered just when he was writing the book that might drive “readers crazy.” He stated that it will not be “shocking for just being shocking” but the reveal will be organic and natural as it may involve three or four more characters.

He added that he is still deciding whether to actually go with it or not, but it will never be seen in the series as the particular character’s fate has already been decided by the producers.