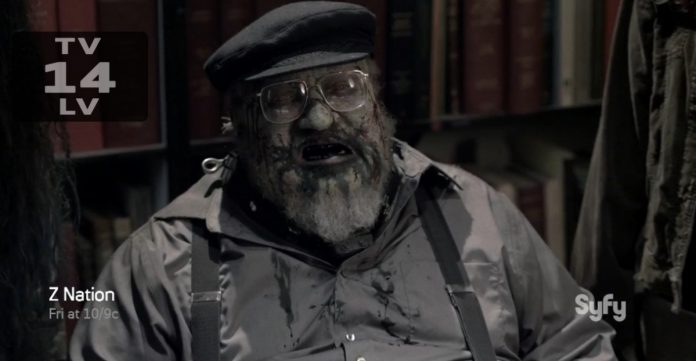 Fans of George R.R. Martin’s “A Song of Ice and Fire” book series are picking out whatever clue they can find about the release of “Winds of Winter,” the sixth book in the series before the premiere of HBO’s “Game of Thrones” season 6.

The most recent clue that fans have uncovered was from the author’s recent guesting in SyFy channel’s “Z Nation” wherein he appeared in the Halloween episode as himself in zombie form.

In the episode, Martin is presented as a celebrity who is part of a collection and is seen autographing a copy of his book entitled “A Promise of Spring.”

From the said episode, fans deduced that the title was a message to fans promising that the next book is coming this spring.

Fans have expressed worries that the sixth book would not be released in time for the airing of “Game of Thrones” season 6 as the series has already caught up with its source material. The last book, “A Dance with Dragons,” was released in 2011.

When the author spoke at the Northwestern University, he acknowledged that he never thought that the series would catch up with him because he had such a wide lead. He also said that he could not write any faster even if he wanted to.

He, however, teased that fans need to watch out for a surprise twist in the book that may be different from what the HBO show already did.

“This is going to drive your readers crazy, but I love it. I’m still weighing whether to go that direction or not. It’s a great twist,” he said to Entertainment Weekly back in April. “And it’s nothing they can do in the show, because the show has alreadyon this particular charactermade a couple decisions that will preclude it, where in my case I have not made those decisions,” Martin further revealed.

Meanwhile, it is expected that “Game of Thrones” season 6 will premiere sometime in April as HBO announced the premiere of its latest musical drama “Vinyl” in February.

The series will run for 10 weeks, so it is expected to end in mid or late April.