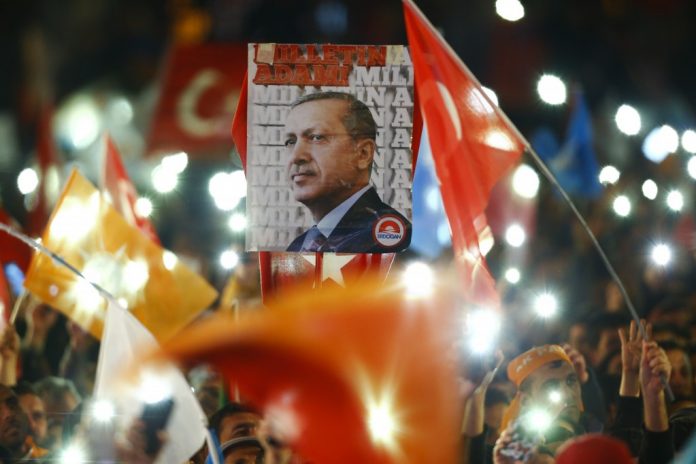 Turkish President Tayyip Erdogan appears to have beaten down his opponents and returned his Islamist-rooted Justice and Development Party (AK Party) to a fourth term of single-party rule over the country. In doing so, he has cemented his own already-firm control over the country, and is a large step closer to becoming the most influential figure in Turkish politics since Ataturk himself. The consequences of the AK Party’s victory are likely to be enormous, for Turkey, the region, and possibly for Europe, Russia and the United States as well.

After Sunday’s parliamentary election, it is now possible that the secular Turkish republic as it has been established since 1923 will eventually become something unrecognizable to its founders. In his early years in power, Erdogan and his AK Party were hailed by Western governments as pragmatic reformers, and proof that political Islam could be democratic and pluralistic. Turkey was moving closer to serious consideration for EU membership, opening up to foreign investment and growing economically.

But since the 2008 financial crisis, and especially since the 2013 Gezi Park protests in Istanbul, during which Erdogan cracked down on perceived opponents in full view of the world, he has become increasingly autocratic. Indeed, Erdogan called for Sunday’s elections after the AK Party failed to gain the majority of votes in June elections and Prime Minister Ahmet Davutoglu was unable to form a coalition with the three opposition parties in parliament. Many Turkey analysts believe that Erdogan had no intention of letting the talks succeed in the first place, and may have pressured Davutoglu to allow them to fail.

Erdogan’s unwillingness to accept a legitimate, democratic election result, and his desire to politicize an office that is nominally non-partisan the presidency are just two of many signs that he is tightening his grip on power.

Sunday’s results will likely make Erdogan more autocratic, as the former prime minister has been vocal about his desire to convert the parliamentary republic into one headed by a president, which, conveniently for him, is the office he already holds. And while the results don’t give the AK Party sufficient power to amend the constitution on its own, Erdogan’s party has a history of following his orders regardless of what the constitution says.

Erdogan’s relationship with the liberal and secular Turkish Kurds, damaged by his divisive rhetoric and political tactics, is likely to deteriorate further under the new AKP government. Indeed, it was because of the Kurds’ success in the June elections that Erdogan’s AK Party was denied a majority, compelling him to call for Sunday’s election.

On Sunday the Kurds were successful enough that they denied Erdogan his longed-for supermajority. And Erdogan is unlikely to forget. The possibility that the Kurds and the Turkish government will resume conflict in the Kurdish regions is no longer that farfetched.

All of this, of course, comes amid a rapidly worsening security situation in Turkey’s backyard, much of which involves Kurds in Iraq and Syria. Additional instability in this already very unstable region worries Europe and the United States, as well as other Middle Eastern countries.

But the same instability that troubles these countries also prevents them from being able to do much about Turkey’s commitment to democracy in the near-term. Turkey’s location, combined with its NATO membership, makes it an indispensable partner in dealing with Russian activity in the region, Islamic State, the Syrian civil war and the unfolding migrant crisis. Dealing with Erdogan is now, for his Western partners, much like holding a wolf by the ears: risky, but the alternative seems much worse.

Sunday’s results don’t end the political and social divides that threaten Turkey. They merely reset the stage for continued struggle: the AK Party against the secular cosmopolitan elite; Erdogan against the Kurds; Islamic State against Turkey and the region; and Europe, the United States and even Russia standing by nervously, assessing the potential impact on their regional interests. Erdogan has the means, motive and opportunity to exploit this moment of authority, and his recent political behavior suggests he will.