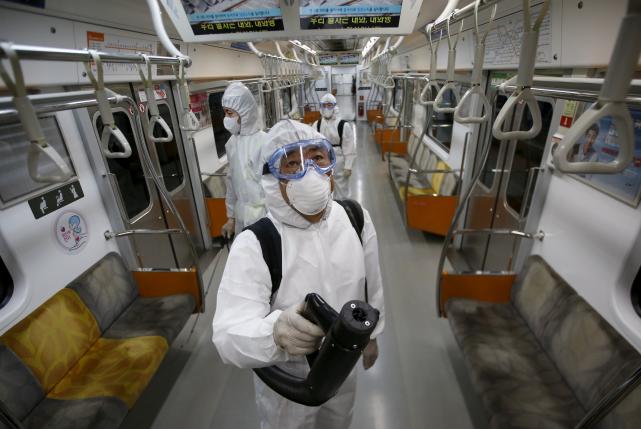 A joint South Korean-World Health Organization mission studying an outbreak of Middle East Respiratory Syndrome (MERS) recommended on Wednesday that schools be reopened, as they were unlikely to spread the disease, just as school boards recommended more be shut.

South Korea’s Health Ministry said on Wednesday two more people had died from MERS and announced 13 new cases, lifting the total number of patients to 108 and prompting President Park Geun-hye to postpone a visit to the United States.

Park had been due to leave for the United States, her country’s closest ally, on Sunday. Her office said the coming week would be a “watershed” for the country’s response to the disease.

The outbreak, the largest outside Saudi Arabia, has fueled public anxiety and hit spending, with thousands in quarantine and the number of schools closing rising to 2,474, including 22 universities. Many people on the streets are wearing face masks, public transport is being disinfected and attendance at movie theaters and baseball games has tumbled.

But the joint mission, which began its work on Tuesday, urged the government to consider reopening schools.

“Schools have not been linked to transmission of (the virus) in the Republic of Korea or elsewhere,” the mission said.

The recommendation came as the school boards of Seoul and surrounding Gyeonggi province announced the extension of existing school closures through Friday and recommended more to shut.

First identified in humans in 2012, MERS is caused by a coronavirus from the same family as the one that triggered China’s deadly 2003 outbreak of Severe Acute Respiratory Syndrome (SARS). There is no cure or vaccine.

Some countries around the region have issued advisories against travel to South Korea or stepped up screening of inbound passengers, dealing a setback to a tourism sector that had been a bright spot for the flagging South Korean economy.

The main Incheon airport said the number of passenger arrivals was down sharply on Monday and Tuesday.

WHO has not recommended any curbs on travel or trade.

MERS has also taken its toll on high street shopping, with department store sales falling 25 percent in the first week of June compared with an average of the first two weeks of May, government data showed. Sales at discount stores fell 7.2 percent, but online purchases rose slightly.

Cinema ticket sales and amusement park entries were down by more than half.

Deputy Prime Minister Choi Kyung-hwan advised against unnecessary fear and urged the public to get on with their daily lives and continue to spend.

The latest two deaths, both cancer patients, bring the number of fatalities to nine. All of those who died had been suffering serious ailments before testing positive for MERS, the Health Ministry said.

South Korea’s infections have all been traced to a man who developed MERS after returning from a trip to the Middle East in early May and who came into contact with others before being diagnosed.

All subsequent infections, including the 13 announced on Wednesday, have been linked to health facilities, the ministry said.

The number of people who may have been in contact with MERS patients and were now in quarantine rose to 3,439, while quarantine has been lifted for 641 people, the ministry said.

South Korea’s central bank is expected to cut interest rates on Thursday to dampen the economic impact of the outbreak, according to a Reuters poll of analysts released on Tuesday.

South Korea’s new cases bring the total number of MERS cases globally to 1,257 based on WHO data, with at least 448 related deaths.