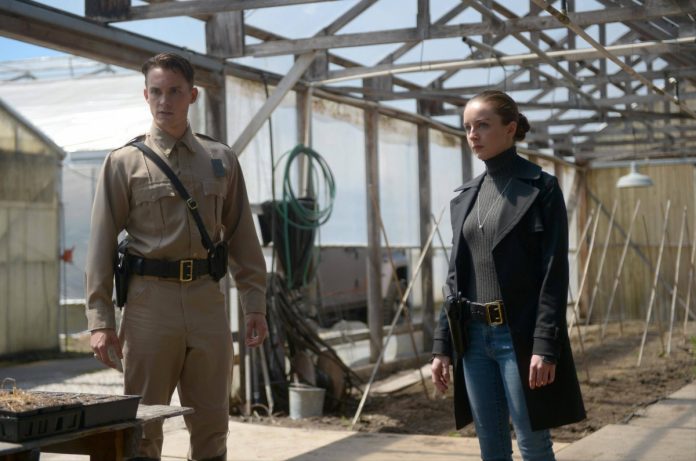 The residents of “Wayward Pines” will be teaming up to track down an escaped Abby in the brand-new installment in season 2 of FOX’s post-apocalyptic drama.

During the last episode, the possibility of humans forming a peaceful understanding with the world’s other inhabitants was severed when Jason (Tom Stevens) shot every Abby captured except for Margaret. In turn, she started seeking revenge and snuck up on Megan (Hope Davis) and lacerated an artery on her leg until she bled to death. Margaret then decided to leave the place.

The promotional trailer shows Kerry telling the team that the leader must be on her way back to her kind, “She wants to get back to them.” When Jason asks what she will do next, Theo says that Margaret may be planning to kill all of mankind.

“No matter how smart she is, we’re going to find her,” Jason reassures them. Theo then suggests, “We have to warn the town, we are telling the town now!” A warning goes on the intercom, instructing the residents to go back inside their houses.

Looking at the security monitor, Kerry points out to Theo that the number of Abbies outside the protective fence has tripled. Hassler then gives his knowledge that Margaret is still inside the town. The clip ends with Mario (Christopher Meyer) asking Theo, “Are we dead?” to which he replies with, “I don’t know.”

Executive producer Mark Friedman hinted to Entertainment Weekly that the Abbies may have been humans before they transformed. “If they’re some degraded version of humanity, what traits of humanity might they still have that we can explore as we learn more about them? If they were human once, what about them might still be human?” he mused.

'The Leftovers' season 3 news: Last installment to move to Australia...