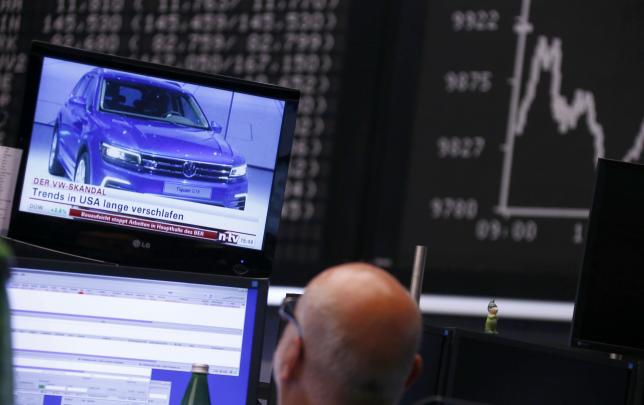 Volkswagen shares plunged by nearly 20 percent on Monday after the German carmaker admitted it had rigged emissions tests of diesel-powered vehicles in the United States, and U.S. authorities said they would widen their probe to other automakers.

German officials, alarmed at the potential damage the scandal could inflict on its car industry, urged Volkswagen to fully clear up the matter and said it would investigate whether emissions data had also been falsified in Europe.

The U.S. Environmental Protection Agency (EPA) said on Friday the world’s biggest carmaker by sales used software for diesel VW and Audi branded cars that deceived regulators measuring toxic emissions and could face penalties of up to $18 billion.

The scandal reverberated on Monday with the White House saying it was “quite concerned” about the reports of VW’s conduct. And the U.S. Department of Justice started a criminal probe of the effort to game the emissions tests, Bloomberg News reported.

The EPA and California officials said on Monday they would test diesel vehicles from other manufacturers for similar violations. In addition to Volkswagen, automakers including General Motors Co and Fiat Chrysler Automobiles sell diesel cars and SUVs in the United States.

“You will understand that we are worried that the justifiably excellent reputation of the German car industry and in particular that of Volkswagen suffers,” German Economy Minister Sigmar Gabriel said.

VW shares fell 18.6 percent to close at 132.20 euros, wiping some 14 billion euros ($15.6 billion) off its market cap. Shares in Porsche SE (PSHG_p.DE), a holding company which controls 51 percent of VW’s common stock, also plunged around 20 percent, while the European autos index was down 4.1 percent.

Winterkorn said on Sunday he was “deeply sorry” for the breach of U.S. rules and ordered an investigation. People including a VW supervisory board member said Winterkorn may have to resign.

“This disaster is beyond all expectations,” said Ferdinand Dudenhoeffer, head of the Center of Automotive Research at the University of Duisburg-Essen.

Analysts said it was unclear whether other automakers had also broken rules or what the ultimate cost could be for VW, which reported 2014 net income of 10.84 billion euros ($12.15 billion) according to Thomson Reuters data.

German rivals Daimler and BMW said the accusations made by U.S. authorities against VW did not apply to them.

Industry experts predicted the scandal would hit VW hard, just as it was hoping to move on from a damaging leadership battle, with a supervisory board meeting on Friday due to discuss a new company structure and management line-up.

Winterkorn, who saw off a challenge to his authority with the ousting of long-time chairman Ferdinand Piech, ran the VW brand between 2007 and 2015, including the six-year period when some of its models were found violating U.S. clean air rules.

Evidence of increased toxic emissions at VW first emerged in 2014, prompting the California Air Resources Board (CARB) to start investigating VW, a letter by CARB to VW dated Sept. 18 showed.

Volkswagen initially denied it was trying to game the inspections, attributing the higher emissions readings to “various technical issues and unexpected in-use conditions,” the EPA said in its formal notice of violations on Friday.

The stonewalling continued until the agency threatened to withhold certification for the carmaker’s 2016 models, the EPA said.

“Only then did VW admit it had designed and installed a defeat device” that purposely lowered emissions while it was being inspected, the agency said. During regular driving, emissions would return to a much higher level, boosting the car’s performance.

Any decision on emissions control mechanisms would have been taken at the group’s Wolfsburg headquarters and not by regional divisions, a source close to Volkswagen said.

Germany’s Robert Bosch supplies diesel emissions control devices to VW, an industry source said. Asked whether Bosch had supplied the electronic module central to the EPA test findings, a company spokesman said: “We supply components for exhaust after-treatment to several manufacturers. The integration is the responsibility of the manufacturer.”

The way carmakers test vehicles has been coming under growing scrutiny from regulators worldwide amid complaints from environmental groups that they use loopholes in the rules to exaggerate fuel-saving and emissions results.

In 2013, an Indian government-named panel accused GM of flouting testing regulations by fitting engines with low emissions in vehicles sent for inspection. And in 2014, Hyundai Motor Co and affiliate Kia Motors Corp paid $350 million in penalties to the U.S. for overstating fuel economy ratings.

The European Commission said it was in contact with VW and U.S. regulators, but that it was too early to say whether any specific immediate surveillance measures were needed in Europe or whether VW vehicles in Europe were also affected.

VW overtook Japan’s Toyota in the first half of this year to become the world’s biggest carmaker by sales, but is facing a sharp slowdown in its most profitable market, China.

The U.S. scandal also adds to the challenge it faces in reviving its North American business, which has long lagged its performance elsewhere.

Ingo Speich, a fund manager at Union Investment that owns about 0.4 percent of VW shares, said he was braced for the crisis to spread for the carmaker that makes vehicles from budget Seats and Skodas to luxury Bentleys and Lamborghinis.

“The market is anticipating more than just the U.S. issue. We have to admit that just looking at the facts there is a huge loss of trust in management,” he said.

Exane BNP analysts said VW’s problems could have wider implications for diesel vehicles, which have long struggled to gain a foothold in the U.S. market.

Bernd Osterloh, the head of VW’s works council and a supervisory board member, called for those responsible to be held accountable. He said Winterkorn would resign should investigations prove he was personally responsible.

The carmaker’s second-largest shareholder, the German state of Lower Saxony, said, however, that decisions would have to wait until the crisis had been “fully and thoroughly” examined.

As well as regulatory fines, analysts said VW could be hit by a drop in sales and lawsuits from shareholders and environmental groups.

The company has already told its U.S. dealers to stop selling the diesel models criticized by U.S. regulators, while Keller Rohrback LLP has filed a nationwide class action complaint against VW’s U.S. division, saying it deliberately deceived consumers and regulators in its emissions testing.