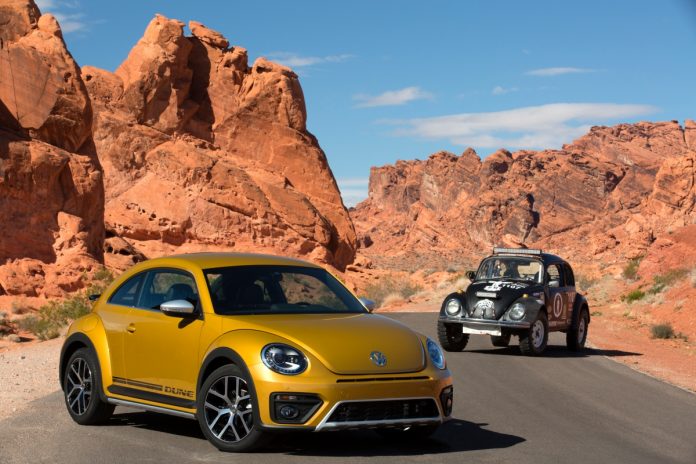 Despite facing emissions fraud and in anticipation of the upcoming Los Angeles Auto Show, Volkswagen has released a pair of new Beetles: the 2016 Beetle Denim and the 2016 Beetle Dune. Both models give a nod to previous well-loved editions.

The 2016 Beetle Denim is Volkswagen’s tribute to the 1970s Beetle Jeans model. The new Denim is a special edition with only 2,000 units available. These will be split between the two color options, Pure White and Stonewashed Blue.

As its namesake suggests, the new Convertible unit takes inspiration from denim and features this material prominently in both the exterior and interior. The convertible top is made from a dark blue denim-like material and the interior features jeans-inspired seat pockets, a red tab, and leatherette accents.

The 2016 Beetle Denim packs a 1.8-liter direct-injection TSI engine and a 6-speed automatic transmission. It runs on 170 horsepower and 184 lb-ft of torque. It features the new infotainment system from Volkswagen, MIB II Composition Color, and other standard features.

It will arrive at dealerships in 2016.

“The new Dune successfully captures the iconic spirit of Baja Beetles, with a more rugged feel and amenities never before offered on the third-generation Beetle,” said Joerg Sommer, Vice President, Product Marketing and Strategy, Volkswagen of America, Inc. “With its sporty and aggressive design and a number of the new technology features, we are confident that the new Dune will appeal to both new and returning Beetle customers.”

Like the new Beetle Denim model, the 2016 Beetle Dune will also come equipped with a 1.8-liter direct-injection TSI engine, 170 hp, and 184 lb-ft of torque.

This Beetle’s other features include 18-inch wheels, a new infotainment system, and a new front bumper.

The 2016 Beetle Dune, which comes in a coupe and convertible variants, will also roll out early next year.