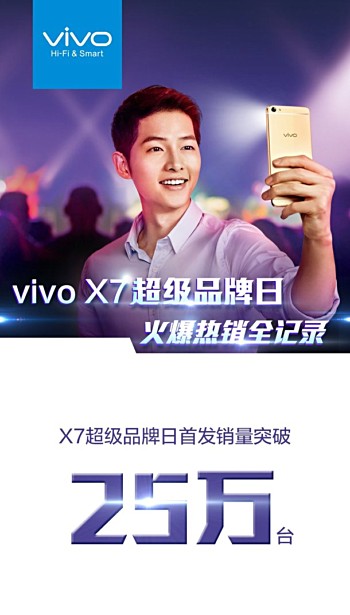 Chinese smartphone manufacturer vivo recently revealed that its newest flagship smartphone, the vivo X7, has sold at least 250,000 units in just the first day of its release.

The achievement was proudly announced by vivo via a promotional poster. The figure presented included sales online as well as physical purchases of the device, with their stats combined. To recall, the new vivo X7 received approximately one million registrations only in a span of five days, making the new smartphone an undeniable success, at least in China.

As of now, the phone is still selling in China. While the device experienced success with its Chinese release, there is still no word on if and when the device would be able to have a release outside China, particularly in the U.S. region.

To recall the specs, the new vivo X7 sports a 5.2-inch Super AMOLED display with Full HD resolution and 1080 x 1920 pixels. The device runs under a Qualcomm Snapdragon 652 chipset, with an octa-core central processing unit (CPU) clocking in at a speed of 1.8 GHz. The Adreno 510 graphics processing unit (GPU) handles the device’s graphics for gaming and video playback.

It packs 4 GB worth of random access memory (RAM) and 64 GB worth of internal storage capacity, with support for an external microSD expansion of up to 256 GB. As for the camera, the vivo X7 features a 13-megapixel rear camera with Phase Detection Auto Focus and LED flash features, and it comes coupled with a 16-megapixel front snapper with LED flash, too.

The device runs on Android Lollipop 5.1 operating system (OS) with the FunTouch OS 2.5.1 on top of it, and it is powered by a 3,000 mAh battery with fast charging capability.

The new vivo X7 smartphone is available in China for a price of CNY 2,498 or at least $375 in current exchange rates. On the other hand, it’s bigger variant, the vivo X7 Plus, will be going on sale starting July 15, and only then will its price be revealed.