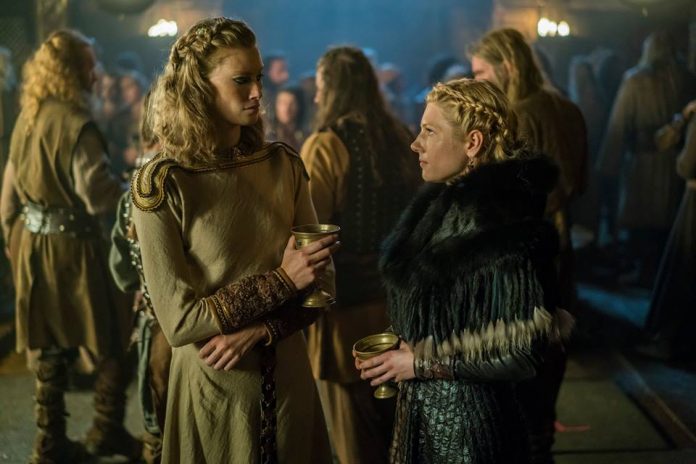 The women are expected to take center stage when “Vikings” returns for its midseason premiere.

Fans of the critically acclaimed historical drama can hardly wait for the final half of the fourth season, wherein a new character named Astrid, to be portrayed by Swedish actress Josefin Asplund, brings about change that could bring Kattegat’s current queen Aslaug, played by Alyssa Sutherland, to her knees, thereby exacting Lagertha’s long overdue revenge. Series creator Michael Hirst has also confirmed that Astrid is going to be the Earl of Hedeby’s new lover.

The official trailer for “Vikings” season 4B shown at the San Diego Comic-Con International last month showed Ragnar’s first wife Lagertha, played by Katheryn Winnick, getting intimate with Astrid, whom Hirst described as “a breath of fresh air.”

Astrid is expected to be seen for the first time in Lagertha’s house when Ragnar (Travis Fimmel) comes to see his former wife. He instead meets the free-spirited Astrid, who is barely affected by his imposing presence. The said encounter will show right off the bat that Astrid is a modern woman who is not to be bound by Viking traditions, and Ragnar will take quick interest in her.

“He loves it, of course,” Hirst said.

The character of Astrid is sort of homage to Astrid Kirchherr, who took iconic photographs of The Beatles and is considered to be responsible for their equally mop top haircuts. This will be alluded to in an upcoming scene where Astrid says, “I would love to change the way you look,” to Ragnar’s now grown-up sons.

Moreover, this take-charge personality of Astrid’s just might convince these men to aspire for more power and set out to wage war on the world, if not on each other.

Fans are also speculating that Ragnar, upon returning from a self-imposed exile, will set about redeeming himself while grooming one of his sons to succeed him. Hirst said that while the past seasons of “Vikings” focused on Ragnar’s relationship with his brother Rollo, played by Clive Standen, the upcoming episodes will now be shifting its focus on Ragnar’s interactions with his sons, particularly Ivar the Boneless (Alex Hgh Andersen) to whom Ragnar is expected to pass on his scepter.

A rumor in a comment thread on Facebook placed the release date for “Vikings” season 4B on Sept. 9, but HISTORY has yet to confirm an official air date.