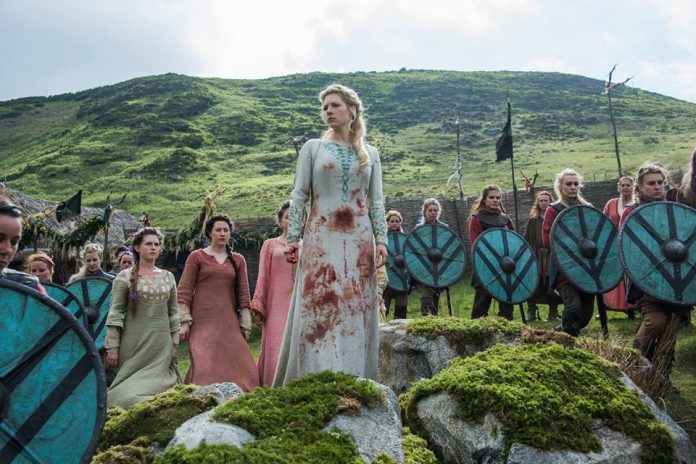 With filming reportedly underway for the second half of History Channel’s hit periodical drama “Vikings” season 4, members of the cast are teasing fans with some behind-the-scenes photos of the production set in their respective social media accounts.

Star Alex Hgh Anderson who portrays Ragnar’s (Travis Fimmel) youngest son, Ivar the Boneless, took to Instagram to share another scenic setting used for filming. “Location, location, location, ” his caption reads. The Danish actor can be seen surrounded by vast greenery of Wicklow Mountains National Park. He appeared to be standing on a bridge over a river.

Previously, the actor has shared several images and videos of the set including a gruesome picture of his character drenched in blood and mud, with an assortment of weapons and other interesting props.

Meanwhile, Katheryn Winnick also teased a glimpse of the brand-new look her character Lagertha will sport in the upcoming installment. When the narrative continues, the shieldmaiden will have a revamped mane to crown her head.

“When hair is an art. Thank you @catherine_argue for your incredible talent,” she stated. It is predicted that despite having a near-death experience during the finale, she may be back on her feet and ready to face Aslaug (Alyssa Sutherland).

Moreover, the story will have a huge time jump and introduce the successor of Ragnar as the king of Kattegat. Back in episode 10, Ragnar returned to his homeland only to find out that his throne has been seized by his sons. He then challenged them to a fight to reclaim his leadership position.

Although it remains to be seen if he will be successful, a recent teaser released by the network confirms the return of other several main players such as Floki (Gustaf Skarsgrd), Bjorn (Alexander Ludwig), Ubbe (Cormac Melia) and Sigurd (Elijah O’Sullivan).

More information regarding season 4B of “Vikings” is expected to be unveiled during the ongoing San Diego Comic-Con. Meanwhile, episode 11 is slated to air sometime this fall.

'Shadowhunters' season 2 spoilers: Clary to look for Jace in upcoming...