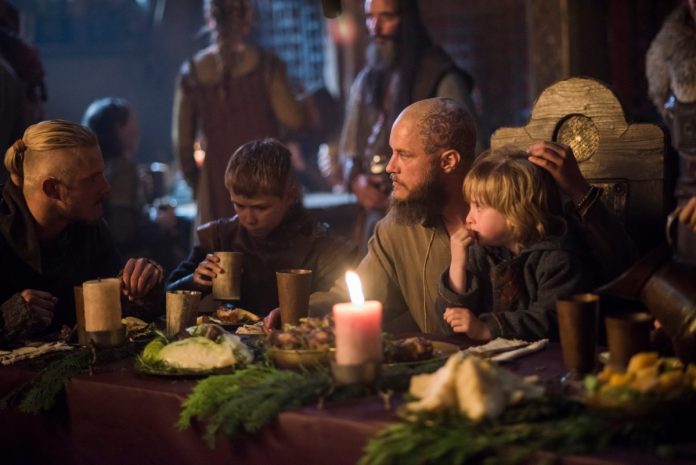 The Nordic men are back in production for the much awaited second half of History Channel’s “Vikings” season 4.

Following the period drama’s midseason finale that aired back in April, some of the cast members have shared behind-the-scenes pictures and videos of production on their respective social media accounts.

Maude Hirst and Alex Hgh Andersen revealed their transformed looks as they give life to their roles as Helga and Ivar, respectively. The latter also teased that when it comes to filming, “Set life on @historyvikings tends to be a bloody mess.”

Meanwhile, actor Jasper Pkknen shared a photo of himself as Halfdan the Black, alongside co-star Peter Franzn as King Harald Finehair. The duo were covered in blood and dirt while smiling at the camera.

Stylist Dee Corcoran previously discussed to IBTimes the new style of some characters as the story moves forward. She hinted that fans will be surprised at the major changes in Lagertha (Katheryn Winnick) and King Ecbert’s (Linus Roache) in terms of appearance.

“This season you’ll see [Lagertha] with little pieces of Celtic metal [in her hair] when she’s going to battle, which looks fabulous on her,” she said about the shield maiden and added, “We had to age Linus considerably so it gave us something to [sink] our teeth into.”

When it comes to the plot, speculations suggest that Ragnar (Travis Fimmel) may be pushing himself to finally meet his end and finally enter their so-called Valhalla or heaven.

When the king of the Vikings faced his brother Rollo (Clive Standen) in the midseason finale, executive producer Michael Hirst mused that there must have been suicidal thoughts inside Ragnar’s head. Some believe that the Ragnar’s key in entering Valhalla lies with his brother and his capacity to finish him off. However, it remains to be seen if he will be able to do so.

Season 4B of “Vikings” returns to the small screen sometime in the fall.

'The Strain' season 3 release date announced: what to expect