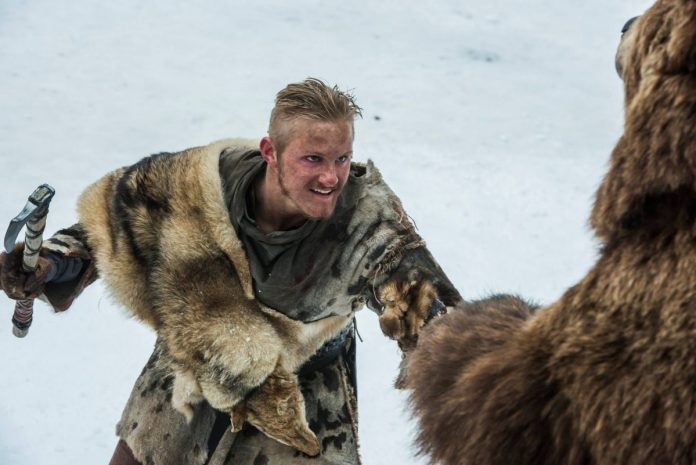 Although the History Channel has yet to announce the return of the second half of season 4, stars of periodical drama “Vikings,” share that they are back on set for the production of the upcoming season 5.

Katheryn Winnick and Alexander Ludwig, who portray mother and son duo Lagertha and Bjorn, have arrived in Ireland earlier this month. They took to their respective social media accounts to tease some updates regarding the show’s progress.

Ludwig posted a photo of himself looking rabid with blood streaking down his face and captioned it with, “Back at it #work #vikings.” Meanwhile, Winnick stands amidst a lot of extras who play the residents of Kattegat. They excitedly shout as a chorus in a video, “Welcome back to season 5 of ‘Vikings!'”

On the other hand, Clive Standen, who has the role of Rollo, revealed to Digital Spy previously that he will miss filming of the first few episodes. The actor also stars in NBC’s new CIA-themed series titled “Taken” which seems to overlap with the filming of “Vikings.”

“I’m going to be doing ‘Taken’ until October time and I’m going to pick up and re-join the ‘Vikings’ team later on in season five. I’m going straight from Toronto back to Dublin, so it’s a good problem to have!” he explained.

When it comes to the narrative, fans may expect a lot of twists and turns with 10 episodes still left in the second half of the fourth season. Creator Michael Hirst mused that he has not “been scratching around for a storyline” and he has no difficulty with the raw material as they tackle a very rich area of history.

“We’re dealing with the explosion of the Vikings into western Europe, and onwards into Iceland and Greenland and the Mediterranean. … There’s still a long way to go. Personally, I would like to carry on until the Vikings discover America. But that may be another story,” he added.

“Vikings” season 4B is predicted to air later in the year.

'The Incredibles 2' release update: Sequel's narrative going in a 'new...