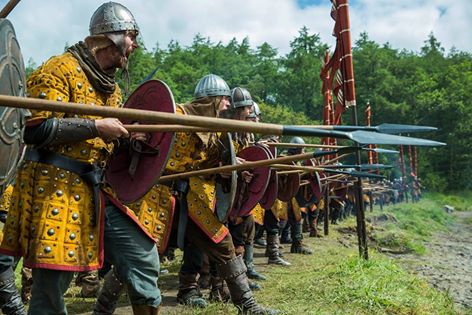 When History Channel’s historical action-drama series, “Vikings” comes back to the small screen for season four, viewers may be treated to twice the number of new episodes.

Actress Katheryn Winnick who portrays the matriarch Lagertha, seemingly announced at an interview with IGN during this year’s Comic-con that the series will run “double the amount.” Although she did not elaborate further, it is deemed that there may be 20 episodes for the new season’s run compared to the usual 10.

In addition to new characters King Harald Finehair, Halfdan the Black and Chinese Yidu a familiar face is returning to the series to reportedly create more chaos.

Zap2it shares that Harbard the Wanderer who had an intimate interaction with Queen Aslaug will be back to stir some drama at Kattegat.

Kevin Durand who plays the role confirmed his participation and revealed that he already shot some scenes, “I was there last week and then I have to go straight back after [Comic-Con],” he says. Considering that he caused the queen’s betrayal of Ragnar and led to the death of Siggy, there is a possibility that his recurrence will prove to be more distressing.

Moreover, rumors have it that as Ragnar recuperates from being fatally injured in the siege of Paris, he may find a new love interest in Yidu to be played by Dianne Doan. She will be a Chinese slave captured in the Red Sea.

For fans who may be wondering if it is possible for someone with Asian origin to be at Scandinavia during that time, “I checked with our historical consultant and he said it’s all possible, it’s all plausible, it almost certainly happened,” creator Michael Hirst said.

He added, “Who knew the world was small enough even then for people captured by pirates in the red sea might end up in Frankia, and then in Scandinavia?,” The Hollywood Reporter shares.

'Jane the Virgin' season 3 spoilers: Will Jane finally lose 'it'?