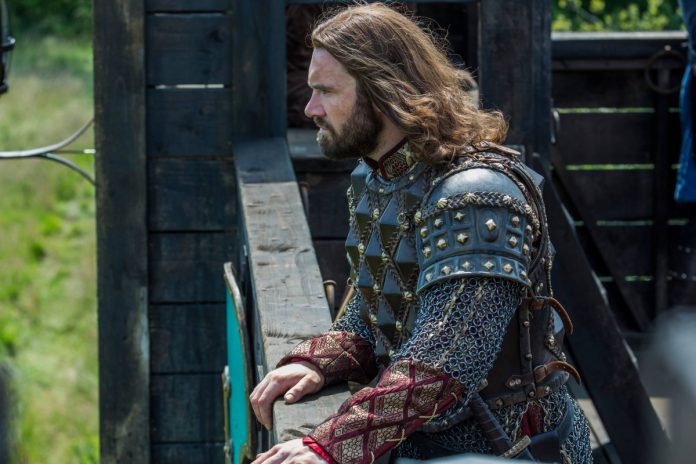 In the new episode of History Channel’s “Vikings” season 4, King Ecbert (Linus Roache) will try to secure the Mercia crown.

Viewers may remember from last week’s episode that Ecbert persuaded Aethelwulf (Moe Dunford) to go on a pilgrimage to Rome alongside Alfred (Conor O’Hanlon). The journey was predicted to take months, which will make it easier for Ecbert to put his plans into fruition.

On the other hand, in the upcoming episode, Ragnar Lothbrok (Travis Fimmel) will persevere in trying to attack Paris again after his men suffered from the recent storm. His son Bjorn (Alexander Ludwig) seems to be losing his patience as they wait.

The sneak peek features Bjorn talking to someone saying, “We have waited three days for a plan of attack.” It was then followed by a montage of what could be the upcoming raid, while someone says in the background, “Space between life and death, that’s where we are most to life.” The clip ends with Bjorn asking, “What is your decision,” before an ominous warning states, “Death is on its way.”

The intallment is also expected to feature Rollo (Clive Standen) anticipating the arrival of his enemies in France, while tension between the mysterious wanderer Harbard (Kevin Durand) and Queen Aslaug (Alyssa Sutherland) will rise as the former returns to the unguarded village.

Reports claim that the queen will slap the visitor after he said to her, “Do not try to possess me,” leading to the assumption that she may be jealous of how he interacts with other ladies in Kattegat.

Titled “The Profit and the Loss,” the synopsis for episode 7 reads, “In England, King Ecbert schemes to secure the crown of Mercia, while outside Paris, a considerable force of Vikings attack Rollo’s defenses. Also, the mysterious wanderer Harbard returns to Kattegat and causes a stir among the women.”

Modern Family Season 7 news: Will Andy and Haley finally get...