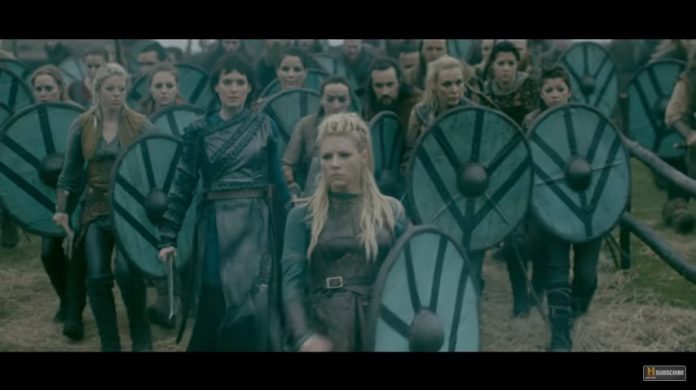 Ragnar Lothbrok’s (Travis Fimmel) exploits may have taken a breather for a bit as fans of the “Vikings” lore are patiently waiting for its return. The historical drama series is said to be all geared up to resume its fourth season next month. Fans who are well-versed with the show are pretty much aware of the bloody skirmishes and political tug-of-war among its male characters. However, the continuation of the show’s current season will now showcase and emphasize more on the women and their equal thirst for power.

It’s a known fact to fans that the shieldmaiden Lagertha, who is played by Katheryn Winnick, and Aslaug, portrayed by Alyssa Sutherland, despise each other and the other half of the running season might finally settle the score as it is speculated that the two might be in for a Nordic catfight to determine who will lord over the town of Kattegat.

Having that said, fans believe that Ragnar’s former wife might connive with another Viking named Halfdan the Black, who is portrayed by Jasper Pkknen. For the uninitiated, Halfdan teased Ragnar in a one-on-one combat in exchange for the latter’s leadership provided that he loses the scuffle.

Meanwhile, other news claims that the shieldmaiden might be the one to emerge victorious in the rumored battle royal if one were to base on recorded events. Moreover, if that would be the case, the warrior queen should not let her guard down as the teaser trailer for season 4’s second half features Aslaug and her battle-hardened horde off to war.

The current season is said to resume with their initial offering dubbed as “The Outsider” which is now expected to air this Nov. 30 on History. Fans need to stay tuned for the latest news and spoilers regarding the fourth season of “Vikings.”

'The Originals' season 4 air date, spoilers: Who is going to...