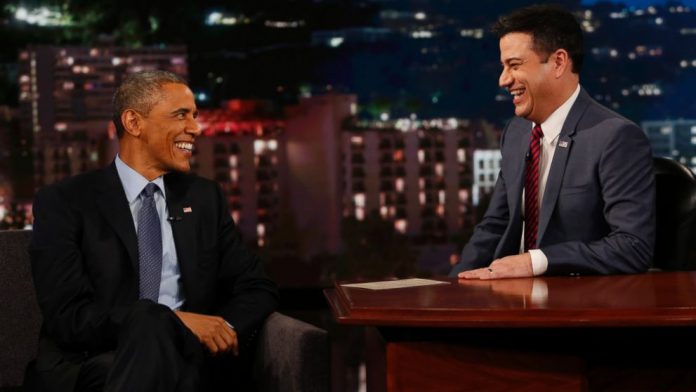 The present administration does not hide the fact that they are solidly behind Hillary Clinton’s current bid for the White House. Aside from the obvious reason that President Barack Obama and Clinton are both from the Democratic Party, the outgoing head of state explained what about the current election has him and first lady Michelle Obama really involved.

In one of his last public outings, the president made an appearance on “Jimmy Kimmel Live” and the good-natured Obama got serious when asked why he has been pushing so hard for Clinton to be his successor. After listing down the former secretary of state’s accolades and capabilities, the 55-year-old focused the spotlight on Republican nominee Donald Trump.

“Look, we joke about Donald Trump, but I do think that part of the reason you’ve seen Michelle passionate in this election, part of the reason that we get involved as much as we have, is not just because we think Hillary is going to be a great president, but also because there is something qualitatively different about the way Trump has operated in the political sphere,” he said.

Over the course of a very divisive national election, Trump had made countless comments regarding a lot of national issues including immigration policies. His lewd statements regarding women also made headlines when a recording of him talking to Billy Bush saying crude words as if to establish male dominance against the female population surfaced a couple of weeks ago. This has caused a lot of backlash for the New York businessman, but Trump appears to have already shrugged it off following a very impersonal apology.

On top of these, his refusal to say if he will accept the result of this coming election has been highly detrimental to the integrity of the national event, something that Hillary Clinton has already called him out on. A lot of professionals have already chastised him due to his ongoing rants which could potentially have massive repercussions including a low voter turnout and even a chaotic transition of government.

Obama is no different, saying that the fact that Trump is willing to threaten something that upholds the rights of the American people just to get his way is enough reason for him to not be worthy of the presidency.

“What we haven’t seen before, I think, is somebody questioning the integrity of elections and the will of the people. What we haven’t seen before is a politics based on putting down, in very explicit terms, of Muslim Americans who are patriots or describing women, not in terms of their intellect and their character, but on a 1-10 score,” the outgoing president explained. “Regardless of what your political preferences are, there is a certain responsibility and expectation in terms of how you behave and how you present yourself. It doesn’t mean that you’re perfect.”

“If you are willing to say anything and do anything even when it undermines everything that’s been built by previous generations, that’s a problem. And that’s why I take this election very seriously,” Obama added.