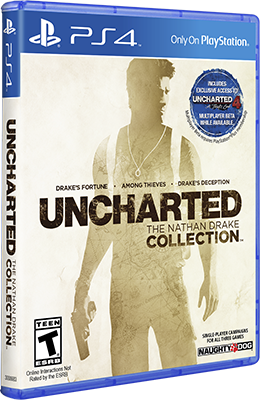 The upcoming remaster of all the previous Uncharted games, Uncharted: The Nathan Drake Collection, will be arriving for the PlayStation 4 this October. And Sony has announced a Day One patch for the game already.

According to a report by GameSpot, the day one patch for Uncharted: The Nathan Drake Collection for the PS4 will be called patch 1.00, and will include various bug and game fixes, and some other stuff that improves overall game experience.

The game patch 1.00 will deliver the following:

The patch is not a mandatory update as of the moment, which means players can still access the game without downloading it first.

PlayStation Universe previously confirmed that the file size for Uncharted: The Nathan Drake Collection will clock in at 44.46 GB. The game will include remastered versions of Uncharted: Drake’s Fortune, Uncharted 2: Among Thieves, and Uncharted 3: Drake’s Deception. All of these previously released games will now be running at 1080p resolution at 60 fps frame rate.

Additionally, players who will Uncharted: The Nathan Drake Collection will be able to have a guaranteed slot for the upcoming beta period for Uncharted 4: A Thief’s End that will begin on December 4 and will last through December 13.

In other news, in an interview with the Official PlayStation Magazine via GamesRadar, Neil Druckmann opened up about the real reason why they had to release of Uncharted 4 back for nowand it has a lot to do with making the game the best they can make it to be.

Apparently, the people back at Naughty Dog wanted to give fans of the series the best ending they can have with the game series, and giving the game the initially promised date would render that “ambitious” ending no longer possible.

“Even when I’m describing the ending, it’s a pretty… Well, I guess this is a little bit of a spoil… Nah, I’m not going to say it!” he further shared. “But there is something that happens that requires quite a bit of work for what we want it to do, and again we would have had to reduce that scope and reduce that ambition to meet that [original] deadline.”