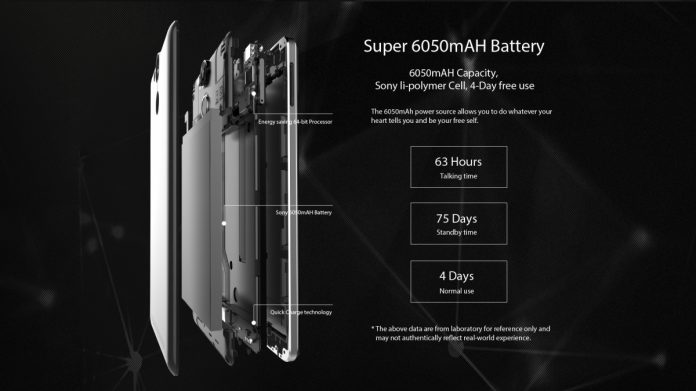 Meet the new ulefone Power smartphone, a new smartphone from a Chinese mobile developer that gives premium level hardware specifications, without the bank-breaking premium price and most of all, without compromising for a smaller battery. The device boasts a massive 6,050 mAh battery capacity.

The new ulefone Power takes pride in being able to squeeze in a massive amount of battery power without sacrificing premium features, and vice versa. The battery is a Sony li-polymer Cell one, and it comes not only with a large battery but also with other features that focuse on the device having more power than the usual smartphonethus its name “Power.”

With the massive amount of power inside the battery, the Power smartphone promises up to 63 hours of talk time with one full charge, four days’ worth of normal use, and up to 75 days phone standby capacity.

The ulefone Power, to further support the large capacity Sony Super, also runs under an energy saving 64-bit MediaTek processor, with a CPU clocking in at a speed frequency of 1.3 GHz.

Aside from that, the ulefone Power also sports a Quick Charge technologyspecifically, a dual channel Pump Express Plus quick charge technology. With the 9V/2A~3A, the Power smartphone can go from zero to a full charge in only 90 minutes to 2 hours. This will, as the company claims, give users enough battery for the next four days. With the Pump Express Plus, the device can charge power for 2 hours’ worth of usage in just 5 minutes charge time and one day usage for a 30 minute charge.

Other features include a fingerprint sensor on the back, a 13-megapixel Sony IMX214 camera with an Electronic Image Stabilization feature, 5-megapixel front facing shooter, 3 GB worth of RAM, 5.5-inch display with a Full HD resolution, microSD support for up to 128 GB worth, a metal body, and Android Lollipop that will soon update to Android Marshmallow.

The device sells for a $180, or its equivalent.