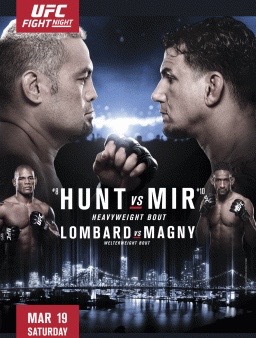 The UFC will be flying to Brisbane, Australia on March 19, as they hold their 85th Fight Night event headlined by two heavyweight contenders.

Number nine ranked heavyweight fighter Mark Hunt will be going head-to-head against number ten ranked heavyweight, former world champion Frank Mir. A victory for either one will move them up a notch in the division ladder, an inch closer to title contention.

The 41-year-old Hunt has been in the mixed martial arts game since 2004, back in the old days of Japan’s PRIDE Fighting Championships (PRIDE FC). He kept his reputation as a solid striker, given his kickboxing background and stints fighting for K-1 Kickboxing.

Currently holding a record of 6-4-1 in the UFC alone, “Super Samoan” holds notable victories against the likes of Roy Nelson, Ben Rothwell, and twice against Antonio “Bigfoot” Silva. His most recent one is a first round knockout victory against Silva at UFC 193 last November.

Like Hunt, Mir is a veteran in the game, having begun his career in 2001. But inversely compared to his opponent, Mir is a Brazilian Jiu-Jitsu black belt winning nine of his 18 fights by submission.

He is, however, coming off a loss when he fought fellow former UFC heavyweight champion Andre Arlovksi at UFC 191 last September. Mir lost the fight via unanimous decision.

The co-main event bout will be a welterweight showdown between rising star Neil Magny as he takes on the returning Hector Lombard.

Magny is coming off a two-fight win-streak against Erick Silva and Ultimate Fighter winner Kelvin Gastelum. Prior to the two fights, he experienced his first loss in two years in the hands of grappling specialist Demian Maia.

Lombard, on the other hand, just finished serving his suspension after testing positive for Performance Enhancing Drugs after his January 2015 fight at UFC 182. The said fight against Josh Burkman was originally awarded to Lombard via unanimous decision, but was overturned into a no contest.

'Prison Break' season 5 spoilers: Michael to be branded as a...