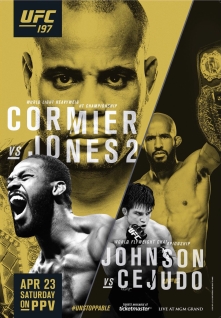 After a highly successful UFC 196 event over the weekend, the UFC is preparing another monumental event yet again for UFC 197, the company’s next big pay-per-view attraction.

Scheduled to take place on April 23<sup>rd at the MGM Grand Garden Arena in Las Vegas, the event will be headlined by a light heavyweight grudge match between champion Daniel Cormier and former champion Jon Jones.

“DC” will be defending his title for the second official time since he won the vacant belt at UFC 187 in May 2015, against top contender Anthony “Rumble” Johnson.

There lies a deep-rooted history of bad blood between Cormier and Jones. From a media day brawl in August 2014 to the back-and-forth trade of verbal tirades that came after, leading up to their UFC 182 title fight in January 2015, the two men have already been at odds with each other.

Jones, however, experienced a blow in his career, after being involved in a hit-and-run accident in April of last year, causing him to have his title stripped by the UFC.

Coming into the fight, he has repeatedly declared he will get his belt back, at the expense of Cormier, who in turn, has vowed never to lose to Jones ever again.

Co-headlining the card is a flyweight title fight between perennial champion Demetrious Johnson and Henry Cejudo. Since winning the inaugural in Septmber 2012, “Mighty Mouse” has remained undefeated, defending his title a total of seven times already.

Cejudo, on the other hand, is an Olympic gold medalist in wrestling and holds a 10-0 record in the UFC. His streak has given him the opportunity to contend for the title for the first time and possibly add another accolade in his so far illustrious fighting career.

Demetrious Johnson vs. Henry Cejudo for the UFC flyweight title