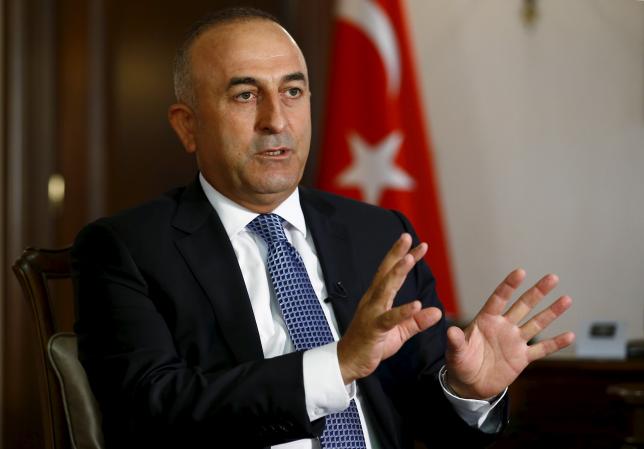 Detailed talks between Washington and Ankara on the plans were completed on Sunday and regional allies including Saudi Arabia, Qatar and Jordan as well as Britain and Francemay also take part, Cavusoglu said in an interview.

“The technical talks have been concluded, yesterday, and soon we will start this operation, comprehensive operations, against Daesh (Islamic State),” he said.

The United States and Turkey plan to provide air cover for what Washington judges to be moderate Syrian rebels as part of the operations, which aim to flush Islamic State from a rectangle of border territory roughly 80 km (50 miles) long, officials familiar with the plans have said.

Diplomats say cutting Islamic State’s access to the Turkish border, across which it has been able to bring foreign fighters and supplies, could be a game-changer. U.S. jets have already begun air strikes from Turkish bases in advance of the campaign.

Cavusoglu said the operations would also send a message to President Bashar al-Assad and help put pressure on his administration to come to the negotiating table and seek a political solution for Syria’s wider war.

Ankara has long argued that lasting peace in Syria can only be achieved with Assad’s departure. U.S. officials, meanwhile, have made clear that the focus of the coalition operations will be squarely on pushing back Islamic State.

“Our aim should be eradicating Daesh from both Syria and Iraq, otherwise you cannot bring stability and security,” said Cavusoglu, using another name for Islamic State. “But eliminating the root causes of the situation (in Syria) is also essential, which is the regime of course.”

A Pentagon spokesman said U.S. and Turkish military officials had held talks on Sunday to work out the tactical details of integrating Turkish combat aircraft into the air campaign against Islamic State.

“We’re looking forward in the near future to welcoming Turkey into our combined air operations center,” Navy Captain Jeff Davis said in Washington.

Cavusoglu said Syrian Kurdish PYD militia forces, which have proved a useful ally on the ground for Washington as it launched air strikes on Islamic State elsewhere in Syria, would not have a role in the “safe zone” that the joint operations aim to create, unless they changed their policies.

Ankara is concerned that the PYD and its allies aim to unite Kurdish cantons in northernSyria and fear those ambitions will stoke separatist sentiment among its own Kurds.

“Yes, the PYD has been fighting Daesh … But the PYD is not fighting for the territorial integrity or political unity of Syria. This is unacceptable,” Cavusoglu said.

“We prefer that the moderate opposition forces actually control the safe zone, or Daesh-free areas, in the northern part of Syria, not the PYD, unless they change their policies radically in that sense.”

Both Ankara and Washington had given this message directly to the PYD, he said.

Turkey’s relations with the PYD, whose forces control territory on the eastern fringe of the proposed safe zone, are complicated by what officials in Ankara say are the group’s deep ties with the Kurdistan Workers Party (PKK), which has fought an insurgency againstTurkey for three decades.

Cavusoglu said Turkey’s military operations against PKK targets in northern Iraq and southeastern Turkey, where Ankara has been carrying out air strikes over the past month, would continue until the group laid down its weapons.

The government says it launched the action against the PKK in response to an escalation in attacks on members of Turkish security forces. Cavusoglu said 61 soldiers and police officers had been killed by the group in recent months.

Critics say Turkey is using what it calls its “synchronized war on terror”, including its greater role in the U.S.-led coalition against Islamic State, as a cover to attack the PKK and try to stem Kurdish political and territorial ambitions.

Diplomatic sources told Reuters last Friday that a second group of rebel fighters trained inTurkey by the U.S.-led coalition could be deployed to Syria within weeks as part of the strategy to push back the Islamic State.

The al Qaeda-linked Nusra Front said late last month it had detained some of a first group of less than 60 rebels, weeks after they were deployed, and warned others to abandon the program, highlighting their vulnerability.

“In the second group we have around 100 (fighters),” Cavusoglu said, but made clear that the ground forces were only part of the strategy.

“The train and equip program (alone) will not be enough to fight Daesh, that is why we agreed with the United States to start joint operations soon,” he said.

Asked whether Iran’s improving relations with West in the wake of its nuclear deal could help the prospects of a diplomatic solution in Syria, Cavusoglu was cautious.

“But the situation in Syria, or in the region including Yemen and Iraq, is totally different to the nuclear deal. What we expect from Iran is a more constructive role in Syria and Iraq, and in Yemen,” Cavusoglu said.

ISIS news: Sex slave survivor tells of the murder of her...