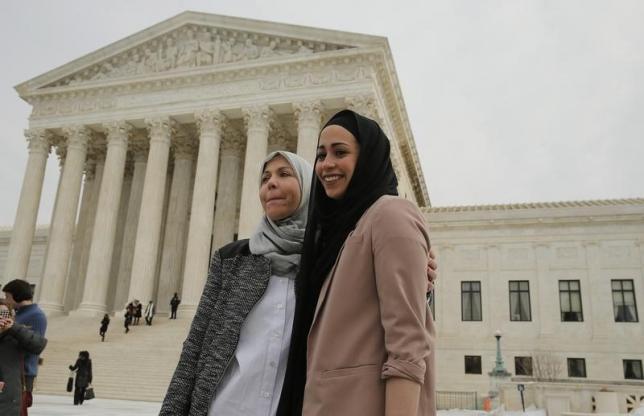 The U.S. Supreme Court on Monday ruled in favor of a Muslim woman who sued for discrimination after being denied a sales job at age 17 at an Abercrombie & Fitch Co(ANF.N) clothing store in Oklahoma because she wore a head scarf for religious reasons.

In an 8-1 decision in the important religious rights case, the court backed Samantha Elauf, who had been rejected under Abercrombie’s sales staff “look policy” after coming to her job interview wearing the head scarf, or hijab, used by many Muslim women.

The decision marked a victory for the U.S. Equal Employment Opportunity Commission (EEOC), the federal agency that sued the company on Elauf’s behalf after she was turned down in 2008 at an Abercrombie Kids store in Tulsa.

“Observance of my faith should not have prevented me from getting a job. I am glad that I stood up for my rights, and happy that the EEOC was there for me and took my complaint to the courts,” Elauf said in a statement issued by the EEOC.

Elauf, now 24, initially won a $20,000 judgment against Abercrombie before a federal district court. The 10th U.S. Circuit Court of Appeals in Denver then threw that out, ruling in favor of Abercrombie, before the high court backed Elauf.

“We welcome this historic ruling in defense of religious freedom at a time when the American Muslim community is facing increased levels of Islamophobia,” said Nihad Awad, the national executive director of the Council on American-Islamic Relations.

Monday’s ruling was the second decision by the high court during its current term in favor of a Muslim alleging discrimination. In January, the justices found that an Arkansas policy prohibiting inmates from having beards violated the religious rights of a prisoner who had wanted to grow one in accordance with his Muslim beliefs.

The court has taken an expansive view of religious rights. Last year, it sided with a Christian-owned company that objected on religious grounds to providing health insurance coverage for birth control for women.

Abercrombie said in a statement the case will continue, noting the justices had not ruled that discrimination took place. “We will determine our next steps in the litigation,” Abercrombie said.

The Supreme Court had to decide whether Elauf was required to ask for a religious accommodation to allow her to wear the scarf in order for the company to be sued under the 1964 Civil Rights Act, which among other things bans employment discrimination based on religious beliefs and practices.

Despite wearing the head scarf, she did not specifically say that, as a Muslim, she wanted the company to give her a religious accommodation.

In an opinion by Justice Antonin Scalia, the court said Elauf only had to show that her need for an accommodation was a motivating factor in Abercrombie’s decision not to hire her.

Justice Clarence Thomas, the sole dissenter, said that “mere application of a neutral policy” should not be viewed as discrimination.

The company’s “look policy” for members of the sales staff was intended to promote the brand’s East Coast collegiate image.

Abercrombie said that in April it replaced that policy with “a new dress code that allows associates to be more individualistic” while also changing hiring practices so “attractiveness” is no longer a factor.

The case now returns to a lower court, with Abercrombie getting the chance to argue that being forced to provide an accommodation would impose undue hardship on it.

Muslim groups said in court papers in support of Elauf that employment discrimination against Muslims is widespread in the United States. Often, the act of a woman wearing a head scarf triggers the discrimination, they said.

The EEOC says Muslims file more employment claims about discrimination and the failure to provide religious accommodations than any other religious group.

Abercrombie had the backing of business groups including the U.S. Chamber of Commerce.

The case involving a young Muslim woman alleging workplace discrimination in the American heartland was decided by the top U.S. court at a time when some Western nations are struggling with culture clashes relating to accommodating Muslim populations. The United States has not faced the same tensions as some European countries includingFrance.