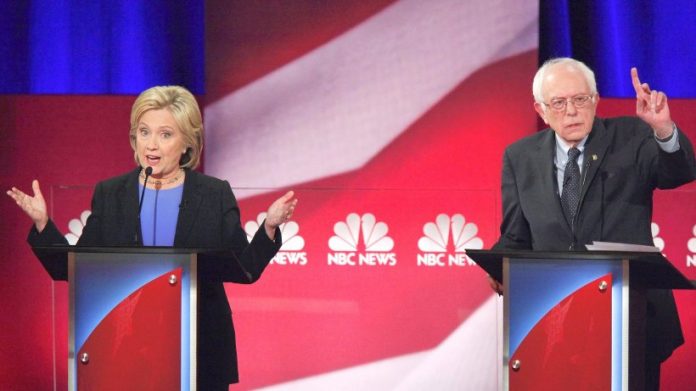 Last week, the Republicans put a united front against Donald Trump. The businessman turned politician is the person who, as of now, has the biggest chance of winning the party’s nomination and face whoever the Democrats choose as their presidential candidate in this year’s U.S. elections.

Now, Democratic presidential aspirant Hillary Clinton vows to not let Trump take the coveted job. All is part of the Former Secretary of State’s seemingly new strategy to shift focus on Trump and the GOP instead of co-Democrat and candidate Bernie Sanders. She explained that Trump is an “equal opportunity attacker,” citing the 69-year-old’s rants against Mexicans, people with disabilities, women, and Muslims. Clinton’s sentiment was met with loud cheers from her supporters.

On top of that, it even looks like Clinton is ready to shake hands with Sanders as she revealed that she considers him an ally.

“I hope to win the nomination. If I am so fortunate, I hope to work with [Sanders], because the issues he’s raised, the passion he has demonstrated, the people he has attracted are going to be very important in the general election,” Clinton said Monday night during the town hall hosted by Fox News, reported TIME. “But equally following the election, to try to get things done. So I do consider him an ally.”

“I applaud Sen. Sanders for really getting a very big turnout among young people, I love to see that,” Clinton, who has already built a significant lead against the senator from Vermont, said.

“I’m going to continue to attract young people. I’m proud of those who are supporting me and I tell young people all the time: you may not be for me now but I am for you regardless,” Clinton further added.

On Sanders’ side, it does not look like he is bowing out of the race any time soon revealing that geographically, his campaign is working really well.

Tiger Woods news: pro golfer hasn't given up on being great...